Hard Times in the Country

Ramblings of a Hayseed 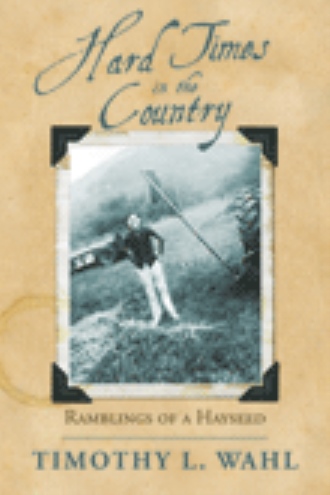 Alex was blind in one eye from a fight with a Brahman bull. He should never have left the safety of our pasture that day. He was downwind from Francis Meade’s luscious herd of redheads, white and red-spotted Ayrshire dames. Apparently so was the hoof-loose and fancy-free humpy-backed Brahman, three times Alex’s size. Alex could not be accused of not having guts. Having wits was another story. At Meade’s pasture, he should have turn-tailed and run. Instead, the artless creature stood his ground. He took it on the chin and then some. That Brahman was a meanie.

By the time the Meades and Wahls got to the scene— armed with pitch forks and sticks—Alex lay possum-like in the thicket of weeds and rumpled sod, fresh, round dollops of bull dew under his tail.

“Got the shit knocked out of him,” Dad noted.

A cow in the barnyard mimicking intercourse with another cow meant Alex time. "Cow's bullin'", my father said. It took both Billy Joe and Dad to control the excited bull, summoning him from his pen with a rod called a leader to the ring in his nose. The putting in of the ring had been an unholy process in which the partition in the bull’s nose was gored with a knife. (Dehorning yearling heifers with large shears, by comparison, was less an ordeal though about as bloody).

Alex raised his nose and sniffed the air and in an instant caught wind of which cow. Catching up with her, he butted her tail aside and took a deep, lingering whiff , puckering, like a wine tester evaluating the bouquet of vintage Cabernet. The moment seemed to intoxicate him. He bellowed and wobbled and thrashed his head.

What was wrong with Alex was his size. It did matter. Alex was six inches to a foot shorter than most cows. The challenge was to get the two to higher ground. A bossy in the bed of the crick was ideal. Alex could stand on the incline, making it easier to take the plunge.

The bull’s spindly apparatus functioned like a hydraulic system, cranking out and reeling in. The scenario could involve the cow taking off running, Alex on his hind legs trying to keep pace. Before long, it was back to the crick bed for take two.

Alex’s days as king of the herd were near an end the night my uncle Gerald dropped by. Uncle Gerald, who had lost a leg to the hay baler, had a gait like Chester Goode on Gunsmoke. Instead of Mr. Dillon, Mr. Dillon, Injuns, the look on his face spelled happy news. The paper rolled up in his hand stated he was a certified artificial breeder, trained at the Curtiss Artificial Insemination School in Iowa. “The seminary,” Uncle Gerald joked.

Dad could now pair cows with blue blood sires from a catalogue.

Timothy Wahl grew up on a dairy farm in the town of Andover, New York. A restless youth who hangs out with other farm boys dreams big and is bound and determined to make his mark on the world.

But reality is a wet blanket. He not only feels out of place but IS out of place. He scores mediocre grades, plays sports clumsily, and contemplates without much success a future of fanfare and celebration.

One of the few places where he feels like he belongs is in Mr. MacCrae’s art class, which also serves as a dumping ground for miscreants and the troubled. No one knows just how troubled Timothy is until the summer of his senior year.

If Timothy has any chance of overcoming his troubles and finding his place in the world, he’ll have to find answers in uncommon places, and most importantly grow up. His life depends on it.

Join Timothy as he finds adventure in a world where girls love The Beatles, neighbors still know each other, and where roots run deep. The good life may be just around the bend, but for now, it’s Hard Times in the Country.

Timothy L. Wahl, born and raised on a dairy farm, teaches ESL at Evans Community Adult School in Los Angeles and distance learning with UCLA Extension. He lives in Glendale, California, with his Venezuelan-born wife Nelly and their two children, Alejandra and Alexander, and a contingent of rescued cats. He can be reached at www.timwahl.com