A Matter of Betrayal

A Story Based in True Events 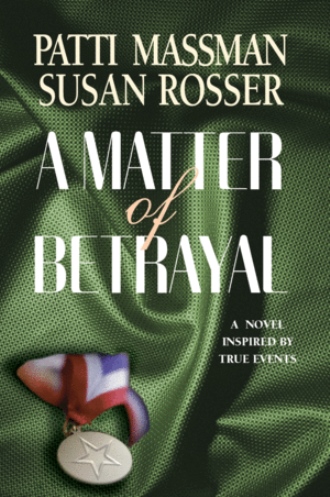 The Vietnam War; a war in which the government betrays its people, the military betrays its soldiers, the soldiers betray those they are assigned to protect...and one woman betrays her best friend. A collage of real events, A Matter of Betrayal illustrates the impact of the Vietnam War on two strong-willed women.

These women's lives and the lives of all Americans are ripped apart by the turbulent 60's and the Vietnam War, taking 30 years to heal.

The daughter of a four star general, Jenny leaves behind her sheltered life for the front lines of a war no one understands. Among the incomprehensible horrors, she discovers love and then great pain as the man she loves becomes a casualty of war. Upon her return to the "world," she is betrayed by her best friend and forced underground to protect her daughter and her own true identity. Music becomes Jenny's tool for survival¡ªthe way back to herself.

Kick is also an army brat and Jenny's best friend. She takes another road leading away from the rigid world of her military parents. Without an ounce of Jenny's idealism, she opts to tackle New York. A would-be photographer, she dives into the underground pop art and drug scene, hoping along the way to snag a rich husband who will give her the security and status she longs to possess. Debased and broken by the heir of an industrialist family and driven by jealousy, she betrays her best friend, her husband and herself.

Only when the truth comes out, as it does through Jenny's grown daughter as she returns to Vietnam to find her father, can the waters calm and real healing begin.

Born in Los Angeles, Massman moved with her family to Reno, Nevada to be closer to her father's two casinos-one in Reno and the other in Lake Tahoe. Living in the Sierra Nevada Mountains, Massman's natural athletic abilities led her to snow skiing, barrel racing her palomino, water skiing and golf. She spent a semester of her junior year in high school in Gstaad, Switzerland, where she became fluent in French and raced on her school's ski team. After attending college in Colorado and transferring to Boston University, Massman graduated with a B.S. in Communications and went to work for a Hollywood public relations firm, and then a theatrical agency. Jumping to "the other side" in 1984, Massman co-authored the New York Times best seller, Fling, with Pamela Beck. A few years later, in 1989, they wrote Rich Men, Single Women, which was made into an ABC movie-of-the-week and produced by Aaron Spelling. The following year Massman and Rosser co-authored Just Desserts, and began their nine-year journey to Betrayed.Massman, a volunteer for Children of the Night, a shelter for sexually exploited children, divides her time between Los Angeles and Telluride, Colorado. Massman, like Rosser, has two grown children who help keep her sane.