A Descent into Darkness 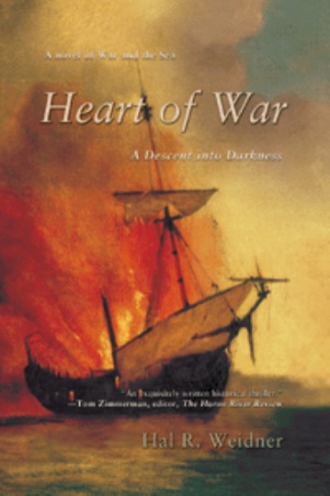 In Heart of War, Hal R Weidner has brought us a blockbuster novel in the tradttion of Partick O'Brian and C S Forester. Captain Parker is ordered to find certain traitors in high places and rid the world of their treachery. For Parker this order is a dangerous one that may well cost him his life. Captain Parker, however, likes danger; it brings the best out of him.. A mysterious cipher from an unknown ally alerts Parker to a plot aimed at crippling King George III's war effort in France and America. The perpetrator is a politically powerful genius, a darling of London Society, and a member of Parliament. Undaunted by his adversary's credentials, Parker declares war on the conspirator and immediately becomes a marked man.

As Parker begins to unravel the traitor's empire like a ball of twine, gathering information and exposing conspirators, his enemy unleashes hell. To survive, Parker fights one brutal battle after another, slowly descending into war's darkness. Now, Parker struggles to remain true to his country-and himself.

In the spectacular tradition of Patrick O'Brian's Master and Commander and C. S. Forester's Horatio Hornblower series, Hal R.Weidner delivers an explosive historical thriller and a chilling commentary on our post 9-11 experiences.

After graduating from Columbia College, Hal R. Weidner served in the United States Marine Corps during the Vietnam War. He obtained his PhD and taught at Washtenaw Community College in Ann Arbor, Michigan. During summers, Weidner worked as mate aboard fishing boats and boom tugs in the Northwest. He is retired as an instructor emeritus.