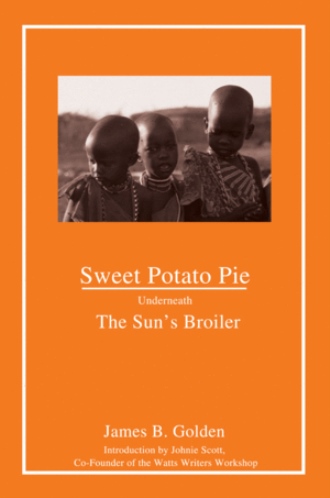 "Sweet Potato Pie gives voice to one of the new generation's poets and writers. Written with clarity and artistic vision, James Golden's first book, challenges us to explore race and gender with passion and truthfulness." -Karin Stanford, Ph.D.

Sweet Potato Pie Underneath The Sun's Broiler is the first volume of poetry from prize-winning poet James B. Golden. The book features an introduction by renowned scholar and Emmy Award-Winner, Johnie Scott, who co-founded the Watts Writers Workshop in Southern California. He begins the work with a reflection on the state of contemporary poetry and a dedication to the personified death of classic word patterns. Hip Hop, Masculinity, Ecology, Death, Rape, Misogyny, Growing Up and Blackness are revisited and intertwined themes within the book. Be that as it may, there is room for social and political satire (On the Occasion of Paris Hilton's Prison Sentence, George, Love Letters To Angela Davis). Perhaps, the most riveting poems within the set lie in the second section, Blackness and Maleness, where a battle begins with the state of Black men (Notes From A Worried Black Man, I Think I Killed Hip Hop, Bleach On My Skin). Unjustified Crucifixion, the poem from which the title receives its thunder, is the stand-out poem of the book where Golden offers the troublesome stories of celebrated Black men. Pulling on every heart-string possible, the world is finally ready for a new era of Black Artistic Creation which celebrates the past while leaping into the future realm of writing.

James B. Golden was born and raised in Salinas, California, and received his B.A. in Pan-African Studies Arts and Literature from California State University, Northridge. He has edited Kapu-Sens Literary Journal and the California State University, Northridge Hip Hop Journal. He is presently completing a Masters in Public Administration degree. He lives in Woodland Hills, where he works as a unit coordinator and literary magazine editor for a private non-profit treatment facility for teenage boys.