A Tale of Four Women in Sparta 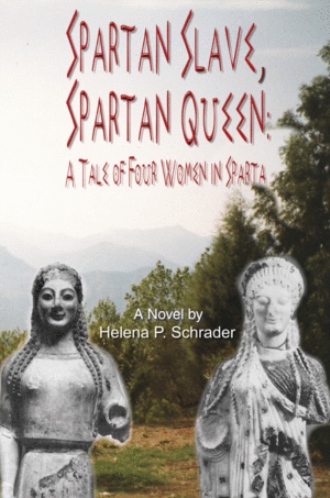 In ancient Sparta during the Second Messenian War, two women, one beautiful and one ugly, are captured and enslaved in the same raid. This is the story of how each responds to their new situation and the women they meet in Sparta.

Niobe's beauty is so great that it captures the attention of the Messenian leader, Aristomenes. He makes her a cherished concubine-until the Spartan "Scourge of Messenia," Agesandros, captures Aristomenes' palace. Niobe suddenly finds herself a slave, and the spoils of the Spartan prince Anaxilas.

Unlike the beautiful and coveted Niobe, Mika is so disfigured by warts that her own uncles sold her into slavery. She becomes the spoils not of a prince but of Agesandros' squire, Leon, a slave himself. He sends her back to serve his master's wife, Alethea, in Sparta.

While Niobe provokes the hostility of the Spartan Queen; Mika encounters the kindness of Alethea, and her beautiful but spirited daughter, Kassia. Soon Anaxilas turns his affections from Niobe to Kassia, while Mika falls hopelessly in love with Leon, and Leon covets only the affection of Niobe.

This book picks up where Are They Singing in Sparta? left off, and although the novel revolves around unrequited love on all sides, it is really a reflection on what beauty is and how it affects human interactions-with a surprise ending.

Helena Schrader earned a PhD in History with a biography of the German Resistance leader who initiated the plot against Hitler on July 20, 1944. Her study of women pilots in WWII, Sisters in Arms, was released in 2006. She has published two novels set in WWII and to previous novels on Ancient Sparta. (See: www.helena-schrader.com) She is an active Foreign Service Officer.