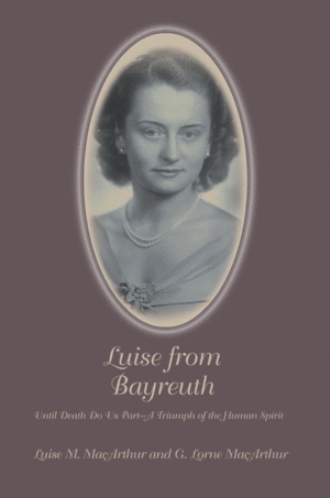 Luise Prechtel was born in Bayreuth, Germany, on March 13, 1930. Her biography Luise from Bayreuth relates her memories-from growing up in Nazi Germany and meeting an American soldier, to family life in Waltham, Massachusetts, and her epic struggle against a progressive form of multiple sclerosis.

Luise's adolescent years were filled with vivid recollections of life in Germany, including treasured moments from a traditional German Christmas. The occupation of the city by the Americans at the end of World War II led to a fateful meeting with a young American teacher named G. Lorne MacArthur, or Lornie, as she liked to call him. The young couple quickly fell in love and in December of 1954, they were married. After the birth of two daughters, Luise displayed constant flu-like symptoms that never seemed to go away. Years later, she received the devastating diagnosis-she was suffering from multiple sclerosis. Throughout the years, Luise battled and survived breast cancer, but she later succumbed to the complications of MS. Her husband Lornie remained her sole caregiver, and together they demonstrated to all the meaning of true love.

Luise from Bayreuth is one woman's inspirational story of faith, bravery, and determination.

G. Lorne MacArthur attended Northeastern University and Boston University. He received B.S., Ed.M., and C.A.G.S. degrees. Lorne was a secondary school educator for nearly forty years and is the author of the book Der Schoolmaster from Boston. He is now retired.

Luise M. MacArthur was married to G. Lorne MacArthur for almost fifty years. She had two daughters and four grandchildren. Her life centered around her family and being kind to others. She is at eternal rest in Waltham, Massachusetts.