THE BLACKLISTING OF THE MAN WHO WAS SHAKESPEARE 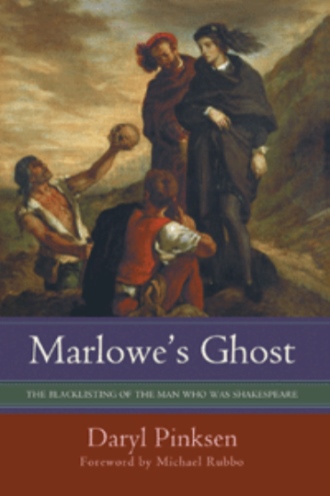 "Marlowe’s Ghost is not the first to make these claims, but it makes a strong case."
—Foreword, Clarion Review

"Pinksen's book is a dangerous dose of delight."
—Mike Rubbo, Director, Much Ado About Something (2002)

"On the morning of May 30, 1593, Christopher Marlowe met with three associates in the English intelligence network. Later that evening the Queen's coroner was summoned to their meeting place. A body lay on the floor. After an inquest, the dead man was taken to a nearby churchyard busy at the time receiving victims of the plague. According to the official report, England's foremost playwright was interred without fanfare or marker. Soon, plays attributed to William Shakespeare began to appear on the London stage, plays so undeniably similar to Marlowe's that noted scholars have since declared that Shakespeare wrote as if he had been Marlowe's apprentice.

Marlowe's Ghost: The Blacklisting of the Man Who Was Shakespeare explores the possibility that persecution of a writer who dared to question authority may have led to the greatest literary cover-up of all time."

Daryl Pinksen is an educator and independent researcher from Canada. He holds a master's degree in science teaching, as well as bachelor's degrees in Physics and English literature and History. In 2006 he was named a Fellow of the School of Graduate Studies at Memorial University of Newfoundland. He lives and works in St. John's, North America's easternmost city.