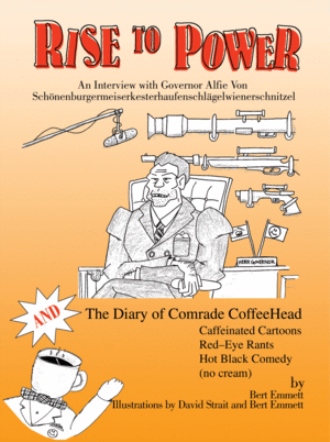 Whether national, state, local or in the bedroom, the art of politics is lip-smacking fun. Here, in a (fairly) candid interview, the superstar of gubernatorial gooberness reminisces, quips, ponders and pontificates. From the early days when his schnitzel was still in a diaper to his present day renown as a mountain of meat running the kookiest state in the union, Alfie speaks:

"A lot of people accuse my father of being a figure in the Nazi party. He was actually just a headwaiter at some Nazi parties. So, lighten up, people. He was just taking orders."

"Look, I was infusing the world of modeling with a masculinity it had not seen before or since. If you could see me up there in a zebra skinned speedo after a fresh bikini wax, you would agree."

Plus: An over-caffeinated observer's take on the national scene as told through a variety of cartoons, commentaries, games and more!

Bert Emmett comes from a long line of teachers and feisty democrats. He has braved stints as an actor, theatre director, radio announcer, stand-up comic and indie filmmaker. He is currently teaching and writing in Los Angeles with the assistance of his wife (another teacher) and daughter.