A Son's Unlikely Journey to His Mother's Heart 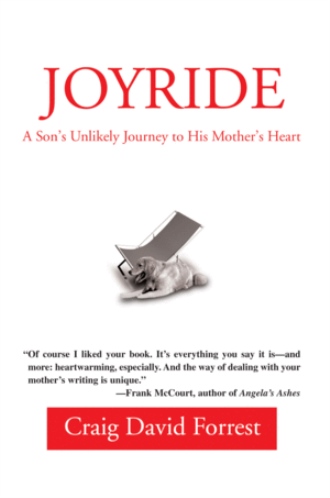 Joyride is a heartwarming memoir of how a young man reconnects with his journalist mother both before and after her death through the archives of her weekly newspaper columns.

Author Craig Forrest's life in print began when he was only five years old. His mother, Libby, wrote a humor column in the local newspaper in America's oldest seashore resort town, Cape May, New Jersey. Craig and his brother, Keith, became frequent subjects of their mother's Erma Bombeck-like writings. Their mother's other topics came from the news she gathered while riding around the shore on her three-wheeled bicycle. Her column, appropriately titled "Joyride", featured useful insights, humorous encounters, and the wit and wisdom that comes from living each day and raising a family.

As he grew up, Craig learned more about his mother by rereading her work. When he returned home to care for Libby in the final ravages of Lou Gehrig's disease, Craig spent the evenings reliving his childhood through her columns. The writings comforted him as he watched his mother waste away, and gave him the strength he needed to come to grips with the possibility of his own death from Hodgkin's disease.

Joyride is a memoir and a loving tribute by a son to his mother-a poignant story reminiscent of Tuesdays with Morrie and The Color of Water.

Craig Forrest has traded the Atlantic Ocean for the Pacific and now resides in Santa Cruz, California, with his wife and son.