A Treasury of Ribaldry 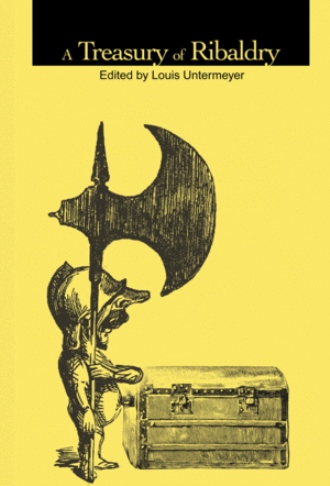 “Treasury” is defined as a “book or person thought of as a valued source.” Here we have both the book and the person, and valued” is what they truly are. We’ll leave to the eminent poet, scholar, wit, and man of letters, Louis Untermeyer, to explain his interest in ribaldry, the subject of this delightful anthology.

“In the broadest sense, the world’s favorite humor has been a playful expression of primitive sensuality. It has, at times, been tinctured with self-mockery, a sort of protective derision, a comic exposure of what is condemned in public and gleefully practiced in private. The satisfactions of the body, from food to sex, are responsible for some of the wisest and wittiest as well as some of the most rollicking and ribald writing in literature…”

Here are about 300 separate ribald items, prose and poetry, arranged chronologically by the author (from Arnacreon-500 B.C. to late Twentieth century). Here are the “naturals” in ribaldry, taken from the works of Boccaccio, Chaucer, Villon, Rabelais, Balzac-and some surprises, by such talented folk as Cervantes, Defoe, Burns, Franklin, Byron, Maugham, Anderson, Mencken, Runyon, and a host of others.

…was called by the late Amy Lowell, “the most versatile genius in America.” His record of achievement in the field of poetry, parody and criticism are almost without parallel. For an extended period he was America’s most widely read poet abroad, and his collections and anthologies have sold hundreds of thousands. At home, he is generally recognized as one of the brilliant poets of his generation.