The True Story of an Exorcism

by Thomas B. Allen 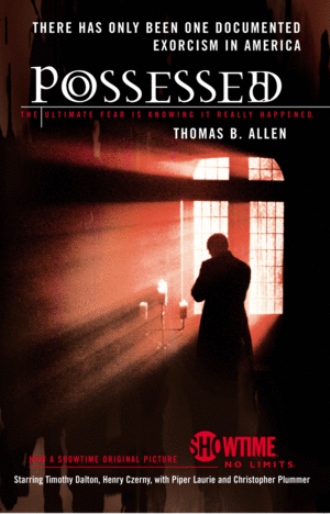 "The Exorcist", a 1973 movie about a twelve-year-old girl possessed by the Devil, frightened people more than any horror film ever did. Many moviegoers sought therapy to rid themselves of fears they could not explain. Psychiatrists coined the term "cinematic neurosis" for patients who left the movie feeling a terrifying presence of demons. At the Washington premiere, a young woman stood outside the theater, trembling. "I come out here in the sunlight," she said, "and I see people's eyes, and they frighten me."

Among the few moviegoers unmoved by the horror were two priests, Father William S. Bowdern and Father Walter Halloran, members of the Jesuit community at St. Louis University. "Billy came out shaking his head about the little girl bouncing on the bed and urinating on the crucifix," Halloran remembers. "He was kind of angry. 'There is a good message that can be given by this thing,' he said. The message was the fact that evil spirits operate in our world."

Bowdern and Halloran knew that the movie was fictional veneer masking a terrible reality. Night after night in March and April 1949, Bowdern had been an exorcist, with Halloran assisting. Bowdern fervently believed that he had driven a demon from a tormented soul. The victim had been a thirteen-year-old boy strangely lured to St. Louis from a Maryland suburb of Washington. Bowdern's exorcism had been the inspiration for the movie.

The true story of this possession, told in Possessed, is based on a diary kept by a Jesuit priest assisting Father Bowdern. The diary, the most complete account of an exorcism since the Middle Ages, is published for the first time in this revised edition of Possessed.

THOMAS B. ALLEN is author or co-author of 18 books, including Spy Book, which was co-authored with Norman Polmar. Formerly Associate Chief of the National Geographic Society's Book Service, he is a frequent contributor to National Geographic Magazine. His writings range from military subjects to natural history, including Vanishing Wildlife of North America, published by the National Geographic Society. He is the author of The Blue and the Gray, a history of the Civil War published by the Geographic, and the co-author, with Norman Polmar, of Spy Book: The Encyclopedia of Espionage and World War II: America at War 1941-1945.