THUNDER FROM A CLEAR SKY 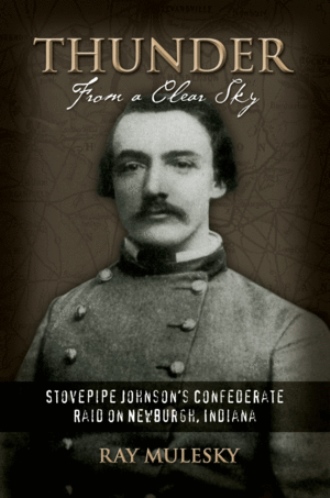 This isn't an ordinary Civil War tale. It is the all-true but little-known story of Adam "Stovepipe" Johnson-Kentucky legend, Texas hero, and Confederate cavalry officer-who boldly led the first Confederate raid across the Mason-Dixon Line to capture the thriving river-port community of Newburgh, Indiana, during the American Civil War. Not a shot was fired.

With the politically divided landscape of Civil War Kentucky and the steamboat economy of the Ohio River as its backdrop, this is the historically accurate account of surprise nocturnal strikes, opportunistic military occupations, and a swashbuckling Rebel icon's daring daylight invasion into the Northern homeland that sealed the fate of western Kentucky for the remainder of the war.

Vivid, thorough, and painstakingly researched, Thunder from a Clear Sky documents five critical weeks of 1862 Civil War history and shares the untold tale of one man's immeasurable impact on a nation at war.

Since arriving in the Midwest twenty years ago, Ray Mulesky has immersed himself in the rich Civil War history of Indiana and Kentucky. He lives in Evansville, Indiana, with his wife and son. Please visit the author's official Web site at www.thunderfromaclearsky.com.