The Chance to Say Goodbye 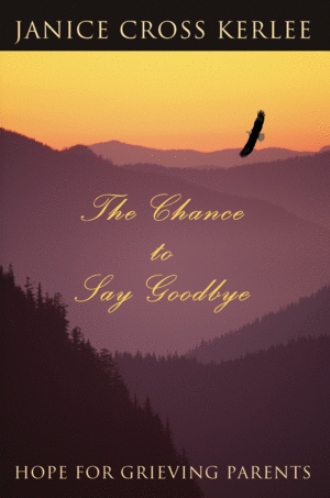 On November 18, 1999, a tragic accident at Texas A&M University in College Station, Texas, claimed the lives of twelve young people and seriously injured twenty-seven others when the annual bonfire to celebrate the University of Texas versus Texas A&M Thanksgiving football game collapsed during the final stages of construction.

Eleven young people died at the scene, but the twelfth victim, Timothy Doran Kerlee, Jr., lived almost forty-two hours before succumbing to his injuries. Seven months after his death, his parents left their secular life in Memphis, Tennessee, and moved to College Station to work as volunteers in campus ministry at the very school where their son had died. What happened to cause this couple to make such a life-changing decision?

The Chance to Say Goodbye answers that question, while telling the tale of a young hero, who, on that fateful night, refused aid for himself until his friends had been helped. Author Janice Cross Kerlee offers help to parents who have lost children. She assists them in dealing with their grief and teaching their friends how to help in a time of need. Finally, The Chance to Say Goodbye testifies to the mighty works of God and His ever-present love.

Janice Kerlee is a native of Hampton, Virginia and has her BS and MS in Mathematics Education from Old Dominion University in Norfolk, Virginia. She and her husband, Tim, were honored by the students of Texas A&M by being selected as a Fish Camp Namesake in 2001. Namesakes are student nominated and selected, and given to those who have shown outstanding dedication to the students of the university. Because of their hospitality, support for students, and support for the university, they were further honored by students in April of 2003 by being named Aggie Parents of the Year for 2003-2004. She and her husband invite you to e-mail them at thekerlees@yahoo.com if you know of any student needing assistance at Texas A&M.