The Lost Legacy of Lewis & Clark 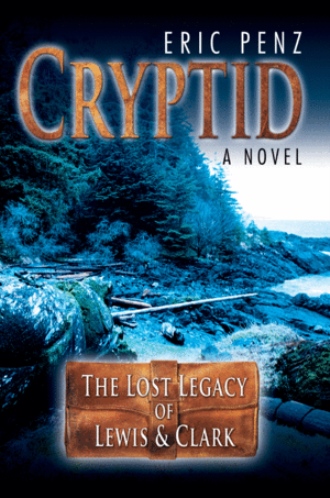 "Outstanding, highly recommended! Eric Penz's fast-paced novel, with its micro-textbook on Gigantopithecus, was an easy pick for my Top Books of 2005."
-Loren Coleman, author of Bigfoot! The True Story of Apes in America.

The line between history and legend can be deceptively thin-too thin perhaps to maintain the claim that one is exclusively fact and one fiction. Such may be the case with the history of Lewis and Clark. For the fact is that two hundred years after they were handpicked by Thomas Jefferson to lead an extraordinary expedition to the Pacific coast legends still persist regarding unexplained gaps in the explorers' field journals.

Call it legend, call it history, Cryptid tells the riveting story of conspiracy theorists who have new evidence of a centuries-old cover-up. When a cryptozoologist, a paleontologist, and a Jefferson descendant begin connecting the dots, they threaten to do more than unveil the well-guarded scientific discovery that lies at the heart of the ancient secret; they threaten to rewrite American history. That is if they can survive a conspiracy that dates back to the Founding Fathers-the very same that haunted Lewis to his grave. It may be that one of our nation's first secrets is still being kept.

Cryptid illustrates how the human act of seeking the truth can be the very element that destroys it. Two centuries in the making, Cryptid is the final chapter of the Lewis and Clark story. And, as with any good tale, the best secrets have been kept until the end.

In the years since Cryptid was originally published a few things have changed in my life. I have since sold my insurance & financial services practice which had been a part of my life for the past 17 years. My day job is now that of a financial advisor. A profession I thoroughly enjoy and yet coexists well with my writing career. My family and I still live in the great Pacific NW where I can cycle, mountain climb, and ski all in the same day. I am too spoiled to live anywhere else.