The Search for Transformation 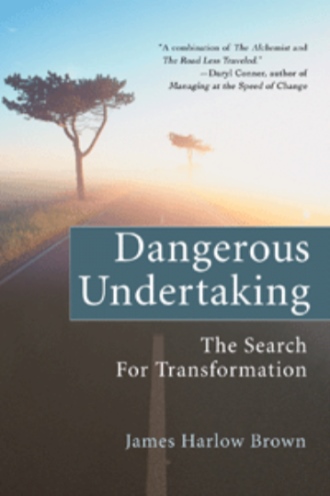 We have lost our magic in today’s world yet it still exists. Dangerous Undertaking is a story about a man who encountered that magic, in the form of a chance meeting on a plane with a strange and wise man. He became a different man, making revolutionary changes yet, in the beginning, he did not believe in magic. Could this happen to you? Read and decide for yourself. Why is it so important to find this magic? In a word, the world is in crisis. Crisis means threat, risk, danger. Yet seen through a different lens a crisis is an opportunity for a fresh beginning, the advent of a new way of thinking, the potential for a return to health. There are many voices telling us about the risks of the crisis we face today. Some are even saying that the human race has gone too far and now even our planet is at risk. But there are other voices—muted and thoughtful, yet powerful and connected to the magic—describing our current crisis as a wonder-filled time when something new is emerging. Thomas Berry, Paul Hawken, Nicholas Kittrie, Walter Brueggemann to name a few. Dangerous Undertaking presents their hopeful insights so that many people will experience the thrill of searching for the magic and understanding their own creative role in resolving the current crisis. Why is the magic essential? Why can’t we solve the issues by ourselves? We don’t know how and we don’t have enough power. A problem has gradually emerged during the last hundred years that we all experience but don’t yet comprehend. More and more, our lives are controlled by large organizations that lack sensitivity to issues that are vital to us. This is problematic, both on a personal and a global level. Many people feel under-utilized and even exploited in their work. Their ‘real’ self and dreams aren’t appreciated by the power structure that constrains them. Organizations, in general, are largely ignoring the crisis our planet faces in the 21st century. Most of us cope with these problems by cutting them down to size and dealing with their effects in our family, our job, our community. This is a good beginning but we must not cede the management of the world to the leaders in power. We must not ignore changing “the system,” the economic, political, religious and social forces that keeps the world on the risky track it is currently on. Our individual magic is essential. I believe strongly that the moral ‘DNA’ of large institutions and society at large first emerges in the hearts of committed individuals who care deeply about the future. There is nothing new about this challenge. The human spirit has been transforming the world for thousands of years. We all know stories about individual change agents like Jesus, the Buddha, Martin Luther King and Nelson Mandela. Perhaps in the 21st century we should simply be patient and depend on the emergence of such extraordinary people to “save our bacon.” I believe we are called to do our part, not simply wait and pray. The ‘little people’—the Frodos and Parsifals—must find the magic and act because of the urgency of the situation.

If you're frustrated with your inability to make a difference in yourself or your organization, learn how you can become a powerful agent of change! In this groundbreaking book, James Harlow Brown challenges, inspires, and shows you how to transform your ideas and your organization in ways you never thought possible.

This visionary and motivational guide contains a number of stories that help you rethink your assumptions about life and create change. Dangerous Undertaking examines how out-of-the-box experiences and ideas can redefine your perceptions, and it addresses the most important concepts involved in personal and organizational change, including:

Perfect for business leaders, executives, change managers, and ordinary working people, Dangerous Undertaking will help you unleash your ability to make a difference in yourself, in your organization, and in the world.

James Harlow Brown is a change consultant who has specialized in large organizational transformation for the last eighteen years. He has published a number of articles in professional journals and was a key contributor to Dr. James Martin?s The Great Transition. Brown is a former IBM executive and project manager at NASA.