THE EXCHANGE OF TRUTH

Liberating the World from the Lie of Evolution 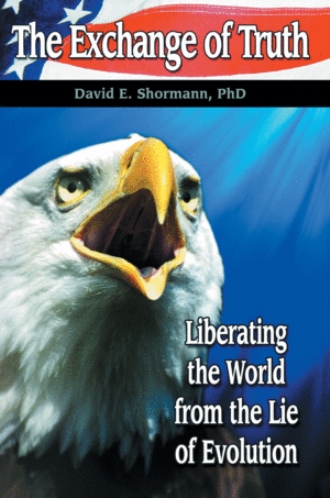 "For the wrath of God is revealed from heaven against all the ungodliness and unrighteousness of men, who suppress the truth in unrighteousness who exchanged the truth of God for the lie, and worshiped and served the creature rather than the Creator." Romans 1:1825

Evolution never happened. The best scientists in the history of the world didn't believe in it, so why should you? Men like Newton, Euler, Galileo, Kepler, Bacon, Kelvin and Faraday believed Scripture and science, God's word and His works, were completely compatible and should be studied together. Then Darwin came along and published On the Origin of Species for the purpose of showing that "species had not been separately created" (Descent of Man, p. 62), exchanging the truth of God for a lie and paving the way for a study of science apart from God.

Evolutionary thinking has taken a tremendous toll on the lives and minds of many, but there is hope. In The Exchange of Truth, Dr. Shormann shows that with a little thought and a basic understanding of genetics and probability, anyone can liberate themselves from evolution's false worldview. Read the book and learn how.

David E. Shormann, PhD, holds degrees in engineering and science. He began teaching science in 1990. He is currently president of DIVE, LLC, a company providing Christian-based math and science instructional software. He lives with his family near Houston, TX, and serves as a deacon for St. David?s Church.