The Shocking Inside Story of The Order, One of America's Most Violent Neo-Nazi Groups - Whose Hate Crimes Have Horrified the Nation

by Thomas Martinez with John Guinther 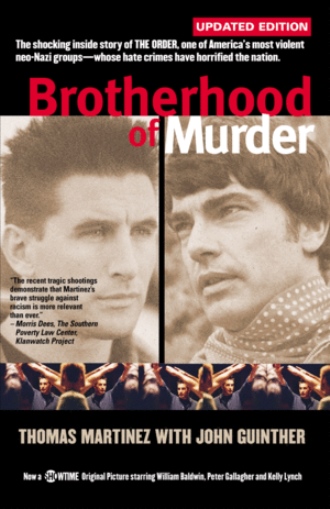 Now a SHOWTIME Original Motion Picture starring William Baldwin, Kelly Lynch, and Peter Gallagher, Brotherhood of Murder chronicles the dramatic true story of Tom Martinez, a man who was undercover for the FBI in one of America's most dangerous white supremist terrorist groups. Given the recent tragic hate-crime shootings, this classic non-fiction book is more relevant than ever.

Growing up poor, white and angry on the mean streets of Philadelphia, Tom Martinez was ready for action. And he found it with Bob Mathews, founder of the most violent secret racist society in America, The Order. The charismatic Mathews was a leader Martinez could follow to hell and back. And he did - through counterfeiting, knowledge of bombings, robbery and murder, and, finally, horrified awareness. Martinez had been seduced by the rhetoric into a group whose racial hatred resulted in the largest armored car robbery in American history, and the killing of Denver talk-show host Alan Berg.

Here is his riveting story: the vivid, harrowing details of life inside The Order, and how he regained his conscience and his manhood by going undercover for the FBI to bring the group down. Thomas Martinez has refused the security of the Witness Protection Program. To this day he journeys across the country, a marked man, risking his life to warn of the dangers of the neo-Nazi right. His extraordinary story packs the power of a first-rate thriller. But in America today, it is the bone-chilling truth. Updated for iUniverse.com by the author, this story packs the power of a first-rate thriller!

Thomas Martinez grew up poor in the very segregated Philadelphia of the 1960s . Martinez was drawn to hate groups and the ideal of white supremacy through a sense of disenfranchisement that affected many of his contemporaries during the turbulent Sixties. By the time he was 21, Martinez was disillusioned and became seduced by the handsome eloquence of David Duke and the Ku Klux Klan.

By his late twenties, Martinez?s fervor for the Klan had begun to wane, and his faith in the quasi-religion of hate had reached an unavoidable stage of doubt. But the need to belong guided his continued involvement in various hate groups such as the National Alliance, Christian Identity, and eventually Bob Matthew?s own organization, The Order.

It eventually became too much for Martinez, the knowledge of deaths he never intended, violence he never endorsed, but there was always the support?money, counterfeit and otherwise?that he needed for his growing family. And before long, even that became too much? He had allowed himself to go to far, and the time for redemption was fading quickly?it was 1984, and Martinez, seeking to right his wrongs, became an FBI informant.

Thomas Martinez has refused the government offer of the Witness Protection Program, and lives in hiding. He does make appearances speaking out against racism and anti-Semitism.

John Guinther is a Philadelphia-based author and journalist. Three of his articles have been cited for excellence by the American Bar Association. He is the winner of the Robert F. Kennedy and Gerald Loeb awards. He has written six other books. Guinther's articles on the Ferber case were nominated for a Pulitzer Prize in 1986. The same year, he was awarded the Louis Apotheker citation for the advancement of the cause of justice by a non-lawyer. His most recent book is Direction of Cities (Viking/Penguin, 1997).