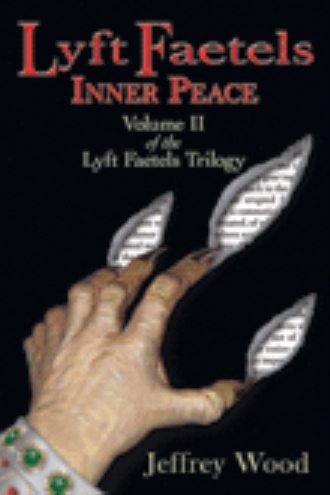 A thousand years old, two feet high, sheathed in garments bedecked in precious jewels and essentially of an ancient alien race dwelling deep within the earth, Lyft Faetels becomes the only hope for the planet, which has decided to tear itself apart due to an increased spin at its core.

Often invisible, his attempts to insure the survival of his beloved Mother Earth uncover any number of hurdles, all fomented by his human counterparts whom by proxy he is tasked to save. The mission takes him from the Wakhan Corridor bordering Tajikistan through the Malacca Straits; to Pulau Simeulue, one hundred miles from the Sumatran province of Aceh; then on to Robinson Crusoe’s Island three hundred miles off the coast of Chile. From the complexities of the Abzu Project to cool off the Earth’s interior; to the discovery of a terrorist network attempting inadvertently to hasten the planet’s demise; to the mind-boggling discovery of the treasure of Vera Cruz, Lyft shows himself to be the ultimate, consummate juggler of human foibles as he desperately races against time in his attempt to cool the planet before it rips itself apart.

Seemingly never at a loss for words, Lyft informs us in Lyft Faetels: The Beginning, Volume III, that his parents gave him his moniker as he exited the womb, babbling about the rudeness of his travails in the birth canal. Somewhat tongue in cheek, they temporarily decided on the name “Lyft Faetels,” in Old English meaning “bag of air,” fully intending it as a nickname until they could come up with a more regal appellation. Somehow, the name stuck, proving to be an apt description of his personality, as he lectures and proselytizes on the exigencies and aberrancies of the human race in volume II, always finding time at the podium when others think he should be engaged in more useful pursuits.

Although Lyft is a fictional character, the historical anecdotes, descriptions of locations, and geological references have been extensively researched to give the various settings of the story the appurtenance of authenticity. Essentially a fantasy, the book has a serious aspect to it from which we all could learn a little bit about ourselves and the realization that the planet is a finite place, that if we irretrievably befoul our own nest, there may be no other alternative than total annihilation.

Lyft Faetels: Inner Peace is volume II in a trilogy by author Jeffrey Wood. Work is progressing on the other two volumes: Lyft Faetels, Volume I and Lyft Faetels: The Beginning, Volume III. In addition, he has composed a humorous children's book entitled The Backward Man. He lives with his wife, Barbara, in Scarborough-on-Hudson, New York.