The Bible Through the Eyes of Its Authors 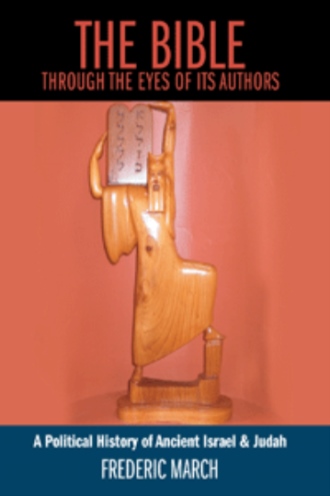 The Bible Through the Eyes of Its Authors interprets the Bible as a human creation by ancient priests who advocated political, social, military, and religious agendas for their nation. They lived in a world of great empires with a two-millennium history before their nation was founded. Thus they inherited an advanced culture that embraced the authoritarian values of imperial powers, together with humanistic traditions, legends, and written laws.

However, The Bible Through the Eyes of Its Authors is not a dry historical analysis. Author Frederic March explores the Bible as a dramatic historical epic in five eras, twenty-one acts, and more than two hundred scenes. Using archaeological evidence, he applies knowledge about the authors' world to interpret each scene. Unlike a traditional Bible study, the commentary does not infer God's intent but that of the respective authors. The book confronts the Bible's stunning moral contradictions. For example the loving God frequently demands compassion, kindness and charity for the poor, the handicapped and the foreigner. But the warrior God demands that Israel annihilate entire nations. God commands a day of rest for every free person, slave and work animal. But He also demands that Moses enforce the death penalty on a simple wood gatherer. Intended to help you understand the authors' messages, motives, and moral contradictions, The Bible Through the Eyes of Its Authors illuminates the tension between authoritarian and humanistic values that permeate the entire Bible. But above all, March fosters an enhanced appreciation of the Bible as an ancient masterpiece of myth, history, and literature.

Frederic March is a writer who focuses on religion, its philosophy, psychology and history. The Bible Through the Eyes of Its Authors is his first published book. He graduated from MIT and retired from a career in worldwide economic development, which provided the diversity of exposure to religious cultures that motivated his writing career.