My Thoughts Are Free 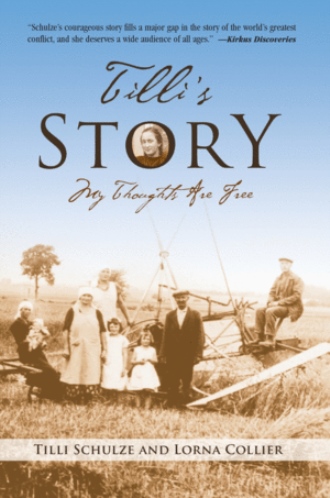 The beautiful, safe, joyful places in young Tilli's imagination were her only refuge from the bombing that tore through the sky above her during World War II. Her thoughts were her only freedom from Hitler's Nazi tyranny, and they were her strength to survive after the war ended, when Russians invaded her tiny farming village in eastern Germany; forced her into months of hiding in a dark attic crawlspace; and took her innocence, her childhood, and nearly her life.

Tilli's dreams-of a time when she could think and act freely, and travel, work, write, worship, and live however she wished-were what fueled the sixteen-year-old to courageously and single-handedly escape the terror of Stalin's harsh Communist rule and create her own happy ending in a free America.

This true tale of sorrow and terror, hope and triumph, is Tilli's story-but it's also the story of the unthinkable suffering and untold bravery of countless innocent children who have lived through a war and its aftermath.

A great piece of individual history from a woman who had some remarkable experiences.... Through this story, readers will come to appreciate more deeply ordinary citizens' experience of wartime and political upheaval, as well as the enormity of the decision to leave one's country and start a new life thousands of miles away. -Lisa Seidlitz, Ph.D., Assistant Professor of German at Augustana College

Tilli Schulze was born in 1934 in eastern Germany. She escaped to West Germany in 1950 and immigrated to the United States in 1952, settling in northern Illinois. She and her husband Herbert have two grown children and three grandchildren. Lorna Collier is an award-winning writer who has worked as a daily newspaper reporter, magazine editor, and television news producer. She lives near Belvidere, Illinois, with her husband and two children.