Book One: Demise of the Black Paladin 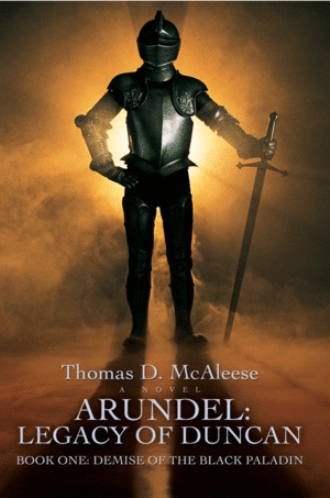 Arundel tells the epic story of Duncan, a young prince who embarks on a heroic journey to reclaim the throne and avenge his father, who was slain by the warrior-sorcerer, Draskene.

Luckily, the prince has the help of a loyal knight, a beautiful siren, a winged warrior, and two overgrown cats with special powers. But to defeat Draskene-who can summon demons and otherworldly creatures at will-he must find the lost Dwarves. They alone can help him find the missing sword of legend, the Brach'dir.

To locate the Dwarves, however, Duncan and his companions must battle demons, armies of Wraulls, and other terrifying creatures. Meanwhile, the evil Draskene is plotting to completely dominate the land. Only bloodshed will resolve this conflict, and Duncan and his friends must find the sword before all is lost.

Arundel transports you to a magical world of sorcerers, heroes, and strange creatures, where good wages battle with evil, where loyalties are tested, and where magic is paramount.

Thomas McAleese lives in Simcoe, Ontario, with his wife and four cats. He has taught transportation technology at Valley Heights Secondary School for the past ten years.