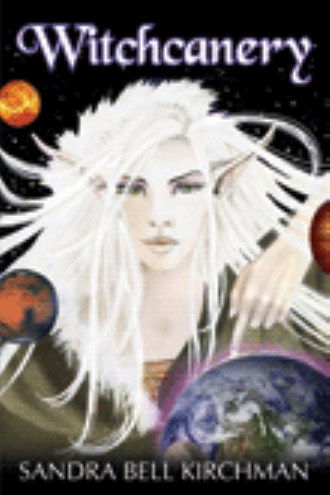 RANDOM PAGES FROM THE NOVEL

Shelley Kesinkowsky wasn't your ordinary, everyday witch—she prided herself on being a modern, computerized witch. She had Internet access. Instead of using ravens, she received all her correspondence via email, including the weekly pronouncements from the Grand Council of Wizards. She liked this new way. Cleaning raven droppings from your doorstep was just a little disgusting... although come to think of it, you never had to reboot a raven.

The problem was, Shelley missed Brad. She didn't know if a witchly heart could break, but hers was giving a fair imitation. Brad had torn down the standard barriers of a witch and found his way into her heart, and now she could feel the pain.

It didn’t matter a whit that Brad was a construct, a golem, created from the recipe that had been handed down by her ancestor, the redoubtable Goodie Maude Schlurr, circa A.D. 1429. Somehow, the end result was a construct remarkably like a golden-haired human child. Since it had been her very first attempt at a construct, Shelley wasn’t sure if the substitution of a dove feather instead of the raven feather called for in the recipe had caused this ungolem-like appearance. Still, like every good cook, she knew that a touch of inspiration in a recipe could turn a hohum meal into a great one. She had thought about it a lot but finally dropped it. With Brad around, it didn’t take long to simply go with the motto of Love Now, Ponder Later.

Jason smiled. Shelley noticed his smile wasn’t as evil as she had thought a hundred years ago. As a matter of fact, it was rather attractive…well, in an unlikable way, of course. Shelley didn’t want to give up all those years of not liking this man…er…wizard …especially now that Brad was gone.

"The Council will make it clear to you, Journeyman Kesinkowsy. Please step this way.”

Shelley said, “Oh, just call me Shelley,” a little crossly and followed Jason to another area of the Chamber.

He pressed a crystal spike sticking out from the wall of the Chamber, and Shelley jumped as a gong sounded hollowly from the depths of the cavern. Slowly, the wall shimmered and dissolved, and Shelley found herself standing at the entrance to an enormous glowing blue room. She could feel the strong healing waves from where she stood but couldn’t see much past the iridescent light streaming from the domed ceiling.

“Welcome, Journeyman Kesinkowsky,” a male voice boomed from beyond the light. Shelley shaded her eyes and tried to peer into the room.

“Please enter,” the voice continued, and Jason gently took her arm and drew her along with him. He maneuvered her into the spot directly under the light and stepped away from her. The light glowed, intensified, shivered electrically, then dimmed. Shelley’s body tingled as she felt the rays enter her body, much like the x-ray back at Hesselburg General Hospital when she had broken her ankle playing dodge ball with Brad.

“Thank you,” the voice boomed again. “Please be seated.”

Shelley blinked and noticed the chair pulled up to a small table in front of a rounded panel presided over by three very old men. For all their age, they emanated power from every pore, from the threads of their robes, from the tips of their white hair, and especially from their eyes—different colors, but all fiery with power. She sank into the chair, gulped, and turned her full attention to the speaker.

Shelley had been particularly proud of her besom. When she had been very young, she had received, like all other young witches in their first century of life, the standard besom—the so-called witch’s “Faerie Horse,” dubbed by the sensitive Irish mortals because of the way witches rode them—ash shaft, birch brush, bound together by copper strappings. However, it shed bristles all over the place, was particularly unreliable in high winds, and was not the most comfortable seat in the world.

She still remembered emailing the Sabben headquarters in New England for their latest online catalog. Thrilled beyond words, she had pored over the various utility flying besoms available—from cushioned seats to sidesaddle slip-streamers, she had been plunged into an amazing variety.

Her only trouble was finding something that truly suited her but wasn’t above her energy means. Fortunately, because she had been frugal most of her life, she had a respectable energy store to draw on. She had finally selected a mid-range besom—slimline, with retractable seat and various plug-in possibilities. It was in fact the basic module for the mid-range, and she had taken the seat option as well as the telescoping feature. It also had retractable handles and was encased in a shadow-rendering filament that appeared to her as a pale dusk blue, her favorite color. When telescoped, the besom was the size of a collapsible umbrella. When fully extended, it was about half her height again and could easily carry her and Brad, even when he was full-grown.

Drawing it out now, she inspected it in the faint pink light of the tunnel, wondering if she could actually ride it in these narrow passageways. Since the tunnels had been excavated to accommodate the much larger Earth golems, she was pretty sure there was enough headroom to accommodate a flying besom but not so sure about her riding the besom in her condition. She had just intended just using it as a walking stick for support, but if she could actually ride it, it would save a lot of time…and pain.

After a long period of time, Jason was pushed into a large chamber with high vaulted ceilings. Risking another push, he stopped, shaded his eyes and gazed around, open-mouthed, at the gigantic cavern. He had thought the Grand Council Chamber was the ultimate in rock caverns, since it was magically carved straight out of blue crystal. But this Earth Legionnaire stronghold beneath the earth was immense…an astounding creation.

Torchlike staffs were embedded in the walls, which were actually more like cliffs than walls. However, the torches gave off, not flame, but sunlight—or so it seemed. Each staff supported a miniature sun that gleamed with the light of a million candles. The walls reflected the light and the entire cavern was awash with the golden glow. The ground was not just rock, but huge patches of grass and meadowlike terrain. In the distance, he thought he saw gardens as well, but it was hard to tell for sure. The rough expanse must have stretched for a mile, maybe more. The far end of the expanse shimmered in a haze but, despite the relative flatness of the surface of the cavern, he couldn't really see that far.

Every so often, at seemingly random points, stood pillars of stone that appeared to be load-bearing columns. Jason nodded. It made sense that an area this vast, with tons of rock crushing down on it, would need sturdy supports at several points.

In the center of this huge domain, a solitary structure soared into the air. Its graceful lines were clean and delicate, giving visions of wide-open space and the limitless of the sky, except of course there was no sky, only the vaulted arch of the cavern ceiling. The building seemed carved out of some lighter stone material, perhaps limestone, and reflected the golden glow of the hundred suns.

When planet Earth faces trouble from the fury of the golem legionnaires of Mother Earth, the Grand Council of Wizards turns to Shelley, whose special golem-creating ability suddenly becomes a much needed commodity. The council orders her to create a custom-built golem that will, with the help of Shelley's former nemesis, High Wizard Jason Jeph, mysteriously keep Earth from destruction. Unknown to the young witch, however, is the lethal card Jason holds should Shelley's golem fail. At this point, neither Jason's extraordinarily talented but grumpy hyacinthine macaw, Byching, nor Shelley's special golem, Blue Eyes, will be able to help.

Shelley fears she will not be able to create the exact spell to turn Blue Eyes into a golem-killing machine. If she fails, Jason may be forced to invoke the deadly words of the Double Pulsar Cantrip. That could cost both of them their lives.

Sandra Bell Kirchman's formal training was in journalism. Kirchman and her husband live in Esterhazy, Saskatchewan, where she is a freelance journalist for the local newspaper. This is her debut novel. Visit her online at http://fantasyfic.com.