How to Reclaim the Moral High Ground of America's Politics 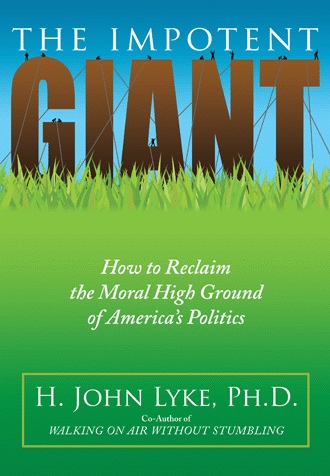 Respect for the Separation of Church and State

Our Founding Fathers enacted the First Amendment to prevent precisely what President Bush has done, which is to allow the church and God’s teachings to be a primary determinant in conducting the affairs of state. He has mixed apples with oranges. Not that God or the American public is either one of those two fruits, and not to be sacrilegious by using that analogy, but I do feel that affairs of state, the people’s business, needs to be considered quite separate and distinct from the president’s personal religious beliefs. If that doesn’t happen, how then are we able to know what reasoning went into our president’s decisions? Did he decide on faith or on sound empirical evidence?

It’s conceivable that President Bush unconsciously has turned to God to give him the confidence to make secular, far-reaching, life-or-death decisions. Since displacement is an ego defense mechanism, therefore unconsciously determined; it is a convenient means of temporarily shifting the decision-making responsibility to a higher power, and in that way, avoiding feeling the responsibility for any ill effects of enacting such a policy. This mechanism is of particular value when life-or-death issues are involved. If it turns out that he has made an earth-shaking error of judgment, such as peremptorily declaring war on Iraq, it is not his fault. After all, he was only following God’s will.

It’s obvious to anyone who has observed our president in action that he’s a very religious man. It is also clear that he practices his religion on a daily basis. That in itself is not what I object to. What I do take issue with is President Bush allowing his personal religious views to frequently seep into his daily political discourse, where he allows such thinking to unduly influence his political and governmental policy decisions. This practice undermines the First Amendment and the very foundations of our democratic country.

Thomas Jefferson wrote a letter to Edward Livingston on July 10, 1822. In it, he said,

“Every new and successful example, therefore, of a perfect separation between the ecclesiastical and civil matters, is of importance; and I have no doubt that every new example will succeed, as every past one has done, in showing that religion and Government will both exist in greater purity the less they are mixed together.”

To the degree that President Bush has allowed his private religious thought to seep into matters of state, he is violating Thomas Jefferson’s dictum.

There has been much written about the influence of God in our president’s life. George W. identifies the deciding moment in his presidency as being when the terrorist attacked our country in 9/11. He has also been asked about the impact his father has played in his life—more specifically, his presidency. His answer does not suggest a great deal of influence. They were not very close. What I’ve read indicates that since he became president, George W. Bush has not allowed his father’s presidential experience to influence him in any significant way.

There is a strong suggestion that he feels he has a personal relationship with God, and that God is helping him make policy decisions to such an extent that it’s difficult to know where God’s influence ends and his begins. I am personally not comfortable with the thought of any deity deciding what my nation should do. As a citizen, that’s my job.

Some have made interesting comparisons of the thought processes of President Bush to those of his archenemy, Osama Bin Laden. They note the same rigidity of ideology, the righteousness and certainty of their cause, the simplistic labeling of good and evil, an uncompromising stance toward solutions, and an overwhelming sense of divine empowerment and obligation. The driven, obsessive, and messianic quality in the president’s thinking about terrorism helps us understand why he appears so preoccupied with the whole subject. It also helps us to better appreciate why he never appears ahead of the curve when dealing with the people’s business. To do all of the people’s business more efficiently and with greater alacrity, President Bush needs to more expeditiously deal with the matters at hand, while still maintaining a thoughtful attitude.

It is too bad that here, in America, an open discussion and debate is rarely held in a public forum so that the extreme views of any religious teaching, be it Muslim fundamentalism or Evangelical conservatism, could be better understood by the public at large. By having such a dialogue, we, as Americans, could better understand the dangers and pitfalls of any excessive religious point of view that may influence matters of state—and in doing so, understand why it’s important to separate those issues related to the church from those related to the state. Perhaps getting involved at the community level through town meetings, where the public is able to air their religious differences, would be a first step to rectify the situation.

Action can be taken in the voting booth as well. Future leaders should be elected for their willingness and ability to uphold the values that America was built upon. Voters should ensure that any potential president has the same reverence for our personal freedoms and rights as our forefathers and first presidents did.

Just as President Bush attempts to ease decisions by letting God do the heavy lifting, he avoids any mental heavy lifting himself by not reading or engaging in any personal fact finding. Rather than value cognition, investigation, and reading (all of which involve critical thinking) and using those tools to arrive at a logical, intellectual conclusion, our president’s favored tool to accomplish this process is the use of his “instincts,” as he delights in calling his gut feelings.

Since President Bush relies heavily on gut feelings, it’s easy to understand why he finds it difficult not to appear defensive when questions are raised about the many problems that have occurred during his presidency. His defensive posture is warranted, because he has made a number of poor decisions, such as waging the Iraq war, lowering taxes in the first place (and, after lowering them, allowing them to stand, even though our national debt is astronomical), not responding in a timely manner to the Katrina disaster, not doing anything constructive to slow the advance of global warming … the list goes on and on.

Essentially, President Bush’s defensiveness occurs because he has acted when action shouldn’t have taken place, or he has failed to act when some kind of action was required. A good leader must display excellent cognitive abilities. Intellectualism, philosophy, and critical thought are essential to making the incredibly complex decisions that the leader of our nation will face every day. No one’s gut can be expected to handle that kind of reasoning; our future presidents should display mental faculties far beyond those that President Bush has demonstrated.

In George Bush Sr.’s book All the Best, George Bush: My Life in Letters and Other Writings, he talked about why he chose not to go into Iraq and capture Saddam Hussein. He didn’t want to do that because he knew, which his son discovered later, that it would be easy to win the war, but difficult to keep the peace.

The Impotent Giant has nothing to do with being a Democrat or Republican. It has everything to do with what it means to be an American. Alarmed about who and what the United States of America represents, author Dr. H. John Lyke articulates how citizens can help to regain the moral and political leadership. Using psychological principles, he provides a discussion of why our country is in the fix it's in and how to return it to its former greatness.

Dr. Lyke's research on the issues began with a re-examination of the lives of outstanding leaders, especially George Washington and Abraham Lincoln, two men who led the United States toward the attainment of American ideals. Studying the principles, courage, and actions of these men offers a model for effective leadership and rekindles one's pride in being an American, a pride that for many has shrunk drastically during the past ten years.

The Impotent Giant examines where the country stands among other nations and how the citizens of the United States and those of the rest of the world perceive its leaders. It encourages citizens to elect the right leaders, discuss the right issues, and act for the right reasons.

Dr. Lyke is a Diplomate in Clinical Psychology (American Board of Professional Psychology) and Professor Emeritus at Metropolitan State College of Denver. He received his doctorate from Michigan State University. After the armistice, he served in Korea as a Detachment Commander in the U.S. Army Medical Service Corps.