Iowa in the Rearview Mirror

Essays and Poems From the Heartland 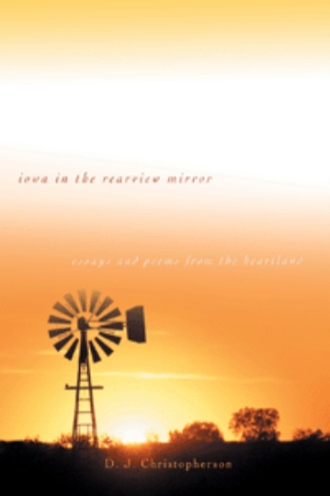 Iowa in the Rearview Mirror is a captivating collection of much-loved newspaper columns written by D. J. Christopherson, a young woman pondering life from the middle of rural America in the 1990s.

Through articles, essays, and poems, Christopherson portrays her small-town life in Cambridge, Iowa, with just the right mix of parody and affection. In her own hilarious style, Christopherson writes about topics including her crazy life, world affairs, her unruly dog, and even her lack of coordination. Whether she is pondering the importance of a favorite television program or trying to make sense of America on the verge of war, Christopherson takes us on a refreshing, lively jaunt through day-to-day life in rural Iowa.

The weather changes from sunny to subzero as we follow Christopherson from sweltering midwestern summers to bone-chilling, stark Iowa Decembers. The seasons, the years, and the topics at hand may change, but some things remain. With Iowa in the Rearview Mirror, Christopherson delights us with her wit, wisdom, and thoughtful look at life, love, and the midwestern mundane.

D. J. (Donna) Christopherson was born and raised on a farm near Cambridge, Iowa. For many years her column was a mainstay in the newspaper the Tri-County Times. Christopherson and her husband currently reside in Yuma, Arizona.