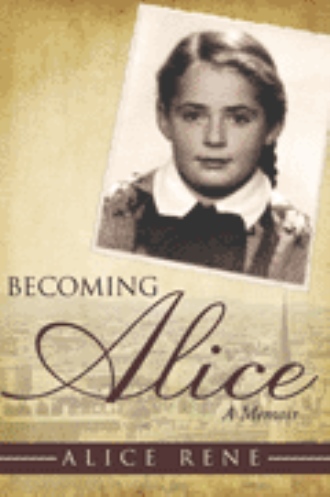 "Strongly recommended a deftly written memoir that will hold the reader's rapt attention from beginning to end."
-Midwest Book Review

"Her ability to authentically capture the bewilderment and pain of dislocation through a child's eyes - including the disharmony in her immediate family - makes for engaging reading that will resonate with young adults everywhere."
-Beth B. Cohen, Ph.D., author of Case Closed: Holocaust Survivors in America, 1946-1954

Six-year-old Ilse watches Nazi soldiers march down her street in Vienna, Austria. It is the beginning of an odyssey that will take her to Riga, Latvia, and finally to Portland, Oregon. Becoming Alice chronicles her Jewish family's harrowing escape and struggle as immigrants to fit into the American landscape. The added problems of growing up within a troubled family cloud her childhood and adolescence.

Ilse changes her name to Alice. Not until she moves into a boarding house in Berkeley, surrounded by girls from a patchwork of cultures, does she make peace with her true identity. Becoming Alice brilliantly showcases Rene's triumph over adversity, identity crisis, and the sometimes debilitating power of family ties.

Alice Rene holds a master's degree in social welfare. She lives with her husband in Southern California.