The little Book of CommonSENSE

The books of Ruy 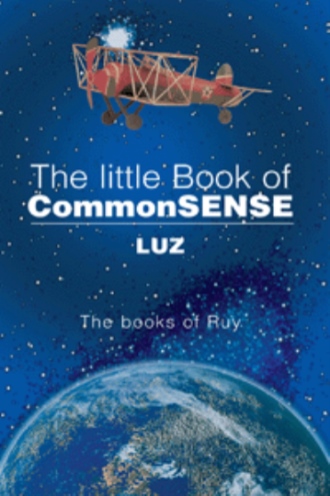 Stupidity Stupidity is unconscious man; groping in the dark. Stupidity is unawareness: unable to join things together. When commonsense is not around, Stupidity gains ground. Sometimes it lasts a moment, often a lifetime. Like starting a war. Like getting married.

The little Book of CommonSENSE will spark many a conversation with its witty banter and playful prose. Embark on a whirlwind tour of hot topics-personal and universal-throughout the world and beyond.

Organized alphabetically, The little Book of CommonSENSE prevents abortion, peeps at cleavage, explains poodles, and encounters terrorists. Myths explode as the author lands in Iraqi oilfields and meets Arabs and gays, sinners and saints, presidents and fanatics, Muslims and racists, and virgins in veils in non smoking pubs along the way.

At times controversial, at other times hilarious, The little Book of CommonSENSE provides insight and explanation into many of today's issues. It's a jolly ride, as entertaining as informative, that underscores how far convention, ideology and dogma have pushed us from reality and CommonSENSE.

LUZ?s insights and observations come from a conscious, aware mind.