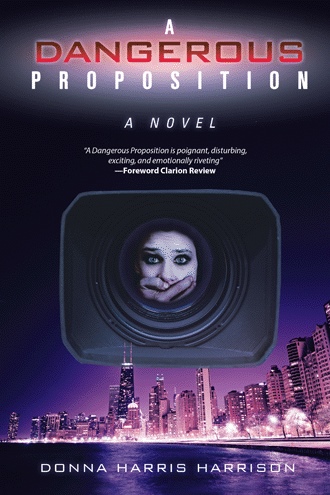 A DANGEROUS PROPOSITION “If you rape me, I’ll have your ass,” she said firmly and calmly. She knew that panic would render her helpless and saw him flinch slightly at the harshness of the word “rape.” “I’m fiery enough to bring you up on charges and nasty enough to create a scandal--you’re the married one, not me. There’s a string of pricks just like you who’ve already been hung out to dry, so take a number. Let’s not overlook that I’m strong enough to dig my nails into your flesh and give your wife a lot of questions to ask when you come home tonight. If I were you, I’d cut my losses and get the hell away from me now.” With that, she mustered all her energy into one terrific shove which landed him back in his chair and she quickly moved past and darted through the doorway. She wanted to leave him with a statement that would put him in his place, give her that upper hand, but she was too flustered. She shot out the doorway and never looked back. At home that night, she wondered how long it would take Ted Marshall to get her fired. That he would was no question. It was merely a matter of what story he would invent and how long and drawn out a process it would be. This was going through her mind when, just before midnight, the telephone shrieked through the silence…”

Julianne Sloan is a fiery businesswoman consumed by her cutthroat career in television production when an assignment introduces her to Elisa Tate. Elisa is drowning in a sea of violence at the hands of a deranged husband. Unlikely allies, these women engage in a plot to expose a monstrous secret, using the power of the television spotlight. Together, they hope to bring awareness to the crisis of women trapped in heinous circumstances, tortured by those they love and hindered by unforgiving judgment. Julianne must stand up to the men at the studio and sometimes put herself in dangerous situations in the name of the greater good. She and Elisa become driven by their “project,” letting nothing slow them down. But the more involved they get, the more their lives spin out of control. They have revealed a matrix of sexual exploitation and personal oppression that causes them to scrutinize their own love lives and challenge their perspectives on love, lust, domination, and victimization. With any luck, their sacrifices will teach other women how to fight back, but Julianne and Elisa have to win the battle first.

Donna Harris Harrison is an Emmy-winning television producer who has worked with NBC, FOX, Paramount, and Lifetime. Her credits include a documentary focused on the crisis of domestic violence as well as a broad spectrum of programming targeted toward women. Now living in Los Angeles with her husband and daughter, she remains entrenched in the entertainment industry.