Making the Most of Your Life after Work 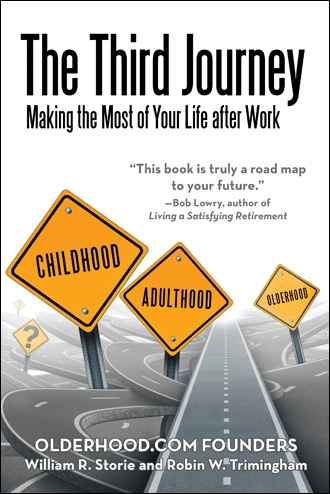 In this Chapter we will discuss the importance of recognizing that the better your reason for getting out of bed in the morning, the more likely you are to keep getting up and moving forward. “Confused by all of this?” “That’s ok, we were at first too.” Welcome to The Third Journey – your life awaits… or at least it will when you wake up and realize that your old life is gone. One of the New Age theories of existence focuses on the notion that the biggest problem people face when they get to “heaven” is realizing that they have arrived, because heaven initially looks exactly like the world they just left. In some respects the start of your Third Journey is frequently a lot like this. You go to sleep one night a member of the “work force” and wake up the next morning in a new and foreign land. Yes, you know you have “retired” because your daily schedule has changed, but in all other respects life seems to be pretty much the same and so you assume it is and go about your daily activities in the same way. Big mistake. Ironically, modern society places significant emphasis on the constant changes that take place during the first third of our lives (our bodies grow, we learn, we develop personalities, we form relationships and a sense of ourselves) but also encourages us to believe that very few changes take place during the last third of our lives. This is far from the case. People joke about having a “second childhood” but very few people appreciate just how appropriate this term is for the phase that everyone goes through when they first pass through the “retirement threshold”. Your first days at home are often quite euphoric and it is not unusual to feel a rush of exhilaration unlike anything you have experienced in years, making you prone to silly, giggly actions – you eat ice cream in the middle of the day, you go around with your shirt on backwards, you color at the kitchen table with the grandkids, you buy yourself a shiny new toy. The early days are also the stage for some remarkable temper tantrums over seemingly small things as you dust off and release some of your pent-up “work world” frustration. You chop down trees that block your view, you shred boxes of documents no longer needed, you throw all your business suits in a heap in the middle of the floor and stomp on them, you pick a fight with the family dog for stealing your spot on the sofa – good times indeed. To say you are acting out is an understatement, but no one addresses it. Instead, there are hushed voices in the corridor … “Now just give him a little time to get his bearings … make sure you play quietly outside, Grandpa is trying to rest …” Perfect. You have just been released from forty years of hard labor, and now your parole officer (aka your spouse) is sentencing you to a nap. To keep the peace you grudgingly comply, but just when you are getting settled she will stick her head through the doorway to verify that you have in fact stayed where she put you, and attempt to justify this by demanding to know whether you want a cup of tea. There is no right answer to this of course; if you decline, she’ll be back in ten minutes to ask if you are sure, and if you accept she will be back in seventeen minutes with coffee – she wasn’t in the mood for tea. That’s ok though, you have a secret way of getting even … next time she announces that she is going to do the grocery shopping, wait until she picks up the car keys and then leap off the sofa ask “Can I come?”. This will drive her completely insane because she is still struggling to work out why this mundane errand that she used to loathe I s suddenly feeling like a refuge from a life sentence of togetherness. If you really want to see your spouse go nuts, when you get to the store, stroll up and down the aisles and make random comments regarding where you would stock the toilet paper, and start little debates regarding which brand of peas should be purchased for that yummy tuna casserole she insists on making again. You don’t need to worry about offending or annoying each other – there won’t be any conversation in the car on the way home anyway because you each cannot tolerate the way the other one drives. Don’t worry if you don’t win the battle today, the best part about your “post work” life is that there is absolutely nothing to prevent you both from getting up tomorrow and doing the same thing all over again. Still sure that there is no such thing as a second childhood? Don’t kid yourself – there is a naughty selfish 7 year old inside you who has been waiting for years for an opportunity to act out, and your lack of planning has given him plenty of free time to invent nasty new games for you to play.

Thanks to advances in health care, expectations for retired life have changed radically. There are no longer only two phases of life (childhood and adulthood)—there is a third vital phase called Olderhood. Once you are free from the burden of work, you can experience a new and fulfilling life-but only if you learn how to reinvent yourself and make a realistic plan regarding how you are going to spend your time.

The Third Journey explores the emotional, financial, physical, and psychological issues that arise in retirement. Authors William R. Storie and Robin W. Trimingham seek to help you unravel your motivations as you prepare for and transition from the workplace into retirement. They take a detailed look at many of the obstacles and personal fears that people encounter as they age and offer perspectives and solutions for everything from downsizing and dealing with relatives to overcoming grief and loneliness, living on a fixed income, keeping busy, dating, and preventing elder abuse.

This guide offers a comprehensive discussion of the challenges and opportunities of later life, providing you with the tools to build a productive and satisfying retirement life.

William R. Storie is the founder of Olderhood.com. He is a retired Chartered Accountant (Scotland) and business executive. He has also produced and hosted three television series on business and retirement issues. He and his family live in Bermuda.

Robin W. Trimingham is the editor of Olderhood.com and a retirement lifestyle coach. She holds a bachelor’s degree from Trinity College at the University of Toronto and is also the author of two Bermudian history books. She lives in Bermuda with her precocious Yorkie, Sunny.