A Sparkle of Royal Blue: Memoirs of the First Female Student of QRC 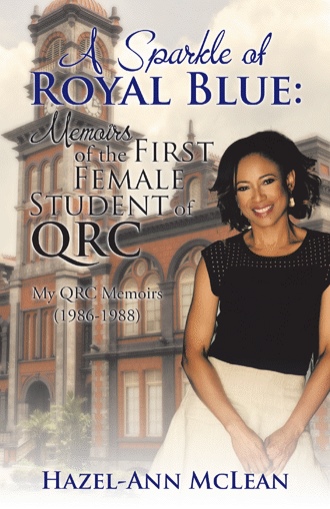 My lifelong education started on my very first day (after being bombarded by 6 guys in the dean’s office), settling in to my classroom at the back of the room and trying unsuccessfully to fit in (I’ll expand on that later) I was dragged off to the Ministry of Education. The Ministry’s building is next door to QRC so I walked over with the dean. Puzzled and confused, I asked him why we were going there and he only said “We need to verify something in the school’s charter”. Later I found out that one of the most senior teachers at the school had challenged my enrollment at QRC and felt that QRC was only for boys and that I should not be there. Yes, girls were not allowed according to his rule. Well, wouldn’t you know that the charter never said a word about ‘boys’ it only mentioned ‘pupils’ and ‘students’ so there! I returned to class having overcome my first of many challenges to attend QRC. I was escorted to my classroom by the dean, Mr. Lilla after his office was stormed by 6 huge men wearing the QRC uniform. It took me a while to realize that these were sixth-form students but they were bigger than I imagined. Their voices were deep and challenging and they were requesting to be introduced to “the new student”. I could have run away and cowered at that point but I stood my ground, along with the help of Mr. Lilla who quickly shooed them out of his office. He then asked one of the students to help take my desk to my classroom which was a block away. I was amazed at the comradery and power that both the students and teachers shared. It puzzled me and amazed me at the same time. This was yet, another of my learning moments which is part of the very rich QRC culture. A culture that I learned well from and use in my own professional and personal life.

Hazel-Ann McLean’s pioneering and monumental experience started on her very first day at Queen’s Royal College, when she learned that one of the most senior teachers at the school had challenged her enrollment and insisted that QRC was only for boys. A short trip to the Ministry of Education confirmed that the school’s charter didn’t mention “boys,” only “students.” She was escorted back to class by the dean of the school, having overcome her first of many challenges attending QRC. Her first step opened the door for dozens more girls to attend QRC and other all-male colleges in Trinidad. As her schooling continues, Hazel-Ann is initially amazed at the camaraderie and mutual expectations of respect that both the students and teachers share. Her scholastic/holistic education at St. Francois Girls’ College, her all-female high school, along with her home life shaped her ability to navigate the rich history, culture, and legacy of QRC. She walks readers through a series of whimsical experiences that offer both obstacles and triumphs to this teenage girl faced with functioning on her own in a school of 600-plus boys. Ultimately, her book documents the lessons she learned at QRC that have carried her through her own professional and personal life.

Hazel-Ann McLean made history in Trinidad and Tobago as the lone female attending an all-male college on a full-time basis. She did this when she enrolled at QRC, a premiere institution that boasts alumni such as the first prime minister of Trinidad and Tobago. The author currently lives in Pittsburgh, Pennsylvania with her two children.