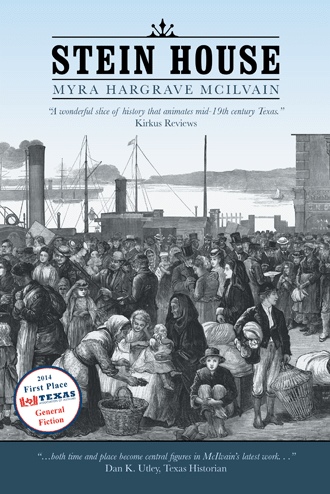 Max reappeared in the doorway of the inn, and the crowd on deck shouted in delight as he stopped, bowed to his audience, and took a huge gulp from the open bottle. Gretchen shuddered against Helga’s shoulder, and Hermie’s fist pounded the rail as he muttered between clenched teeth, “Come on, Papa.”

“It’s all right. The captain will wait.” Paul breathed into his cupped hands.

The ship began its laboring surge as the black, swirling water of the Weser River churned up waves that grew from undulating ripples to frothy caps. Still Max whirled and danced and tipped his bottle as he headed almost casually toward the departing ship. The laughter died, and in a body the crowd began coaxing him to jump, make one mad leap, to entertain them one more time.

Helga pulled the children tighter against her, holding them, willing them not to watch.

And then Max jumped, tossing the empty bottle into the water as his body floated, suspended, arms extended, fingers spread, wildly grasping for the slowly arching rail. His face suddenly twisted to disbelieving shock as his fingers missed their grip, and he dropped like a slender arrow straight down into the roiling, icy water without causing the slightest splash.

After three long months at sea, Helga Heinrich and her four children sail into the thriving Indianola seaport on the Texas coast in 1853 to begin a new chapter.

Myra Hargrave McIlvain is a teller of Texas tales. Whether she is sharing the stories in her books, her lectures, or her blog, she aims to make the Texas story alive. She has two adult children and a houseful of grands. She and her husband, Stroud, live in Austin, Texas.