China’s Dance with the Foreign Devils

Foreign Companies and the Industrial Development of China 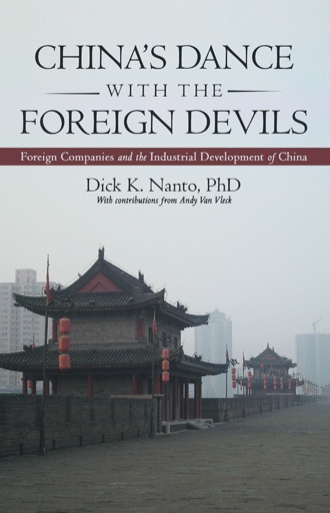 In 2010, as I walked through the Beijing International Airport, I marveled at its high undulating ceiling, polished stone floors, and all the accouterments of a first class gateway to a country. This Terminal 3, built in time for the 2008 Beijing Olympics, was the second largest on earth and in 2009 had been ranked by Condé Nast Traveler magazine as the World’s Best Airport. The Chinese government official with me said that earlier in the year she had escorted Henry Kissinger during his visit to Beijing. When Kissinger saw the new airport, he remarked that it made JFK airport in New York City “look like shit.”

This experience contrasted sharply with the dour December day in 1988 when I first arrived at the old Beijing international airport. That terminal, built when Beijing was still Peking, fit the model of socialist construction. It was dark, dingy, and had a luggage carousel so antiquated that it might have served Mao himself. When I went to claim my baggage, imagine my surprise when I saw a half dozen Santa Clauses interspersed among the drably clad Chinese leaning around the carousel waiting for their bags. The Santas with their red and white costumes, so bright and redolent of Christmas in America, seemed incongruent with their surroundings. It turned out that they were from the American Midwest and had come to the People’s Republic of China (PRC) to spread some cheer and introduce the Chinese people to the spirit of giving. Little did they know that over the next quarter century, foreigners would be giving China much more than candy canes. Western and Asian companies would provide China with the keys to the kingdom—the keys to generating wealth in the 21st century.

How this happened is not easy to decipher, but the results are apparent. Just about everywhere in the PRC, the story is the same. The China of old has emerged from its convulsive past and is racing to reclaim its position as a leading country of the world. In the mid-1980s, China was a nation of unproductive state-owned industries, antiquated Soviet-based technology, grimy streets, and intrusive state control. During my 1988 visit to China, on the first morning when I walked out of the hotel to greet the communist version of the Middle Kingdom, the initial sight I saw was a wagonload of coal being pulled by a horse. The coal was for the coal-burning furnaces and stoves being used to heat Beijing. The air was thick with smog, and the collar on my white shirt never stayed white for long. Our group leader warned us not to go out jogging, not to drink tap water, and to avoid breathing polluted air.

At that time, U.S. dollars could not be converted into yuan, and foreign visitors had to trade their currency for Chinese foreign exchange certificates for use in approved shops such as the Friendship Stores. The boulevard passing Tiananmen Square had lanes exclusively for bicycles that were jammed with hordes of riders bundled up and braced for the cold winter winds. Beijing’s leading retail establishment, Department Store No. 1, had a display of coal stove implements, including a bellows, in the middle of its first floor where one would expect to find luxury cosmetics and high fashion accessories. There were virtually no neon signs. At night, the streets were dark save for rigidly placed street lamps and an occasional restaurant with a string of Christmas tree-style lights hung in front to attract potential customers. Except for a few Russian model cars and Volkswagen Santanas as well as numerous faux Western brand-name toiletries, there was little evidence of foreign products. The country had hardly been touched by the economic revolutions occurring just outside its borders that turned Japan, Taiwan and South Korea into export powerhouses. In the previous year (1987), China had exported only $35 billion in merchandise with a third of that in textiles and clothing. By contrast, South Korea had exported $47 billion, Taiwan $54 billion, and Japan $255 billion.

By 1988, China was a decade into its campaign of reform and opening that was to come to a screeching halt following the 1989 Tiananmen Square incident. Deng Xiaoping was yet to take his 1992 Southern tour and to declare that “to get rich is glorious.” Planning was yet to commence on building Pudong, the glitzy financial center of Shanghai, and the country was just beginning to see the benefits of foreign direct investment (FDI) and foreign invested enterprises (FIEs), particularly from Hong Kong and Taiwan. Little did Beijing realize that over the next quarter century, foreign companies would become the source of critical technology, would be instrumental in training workers to operate in the modern business world, would transfer valuable managerial skills, and would provide the gateway into global supply chains. Foreign invested enterprises would account for about half of all China’s exports and a fifth of industrial assets. Without them China could not have accumulated more than $3 trillion in foreign exchange reserves nor could the country have built the modern financial and logistical infrastructure that underpins much of its entry into the world of business in the 21st century.

This is not to demean the efforts of 1.4 billion Chinese people and the ability of the government, at all levels, to create incentives and both to unleash and to guide the economic forces that lifted hundreds of millions of its people out of poverty. The rise of China cannot be attributed to a single cause but to a chain reaction ignited by the policy of reform and opening of 1978. The development process was not linear and without stumbling, nor was it without hesitantly “feeling the stones while crossing the streams” leading to modernization. Beijing may have allowed foreign companies to enter the market and build factories, but it was Chinese companies that emulated them and Chinese workers who toiled the long hours sewing garments, assembling consumer electronics, or gluing athletic shoes who made the factories work. Labor in China was cheap, and there seemed to be an inexhaustible supply of workers dexterous and willing to toil—often in terrible working conditions—until the orders were filled. Still, without the demand from exporters and the technology and product designs brought by foreigners, long hours of tedious labor would have brought the Chinese workers no more than the meager subsistence that existed during their Cultural Revolution.

Credit also goes to Beijing for tearing down roadblocks to progress and putting policies in place that unleashed competitive forces in the domestic economy. Beijing had and still does have an active industrial policy, as does each province, village, and township. As will be shown in this study, Beijing’s policies were largely reactive not proactive and were in response to economic successes at the local level. There were no genius economic planners at the top who guided the transformation of the economy. There were Communist Party leaders who were responding to pressures from below, protecting their elite positions and who were steeped in the socialist tradition of trying to build things bigger.

By and large, at the provincial and local level, the primary policy has been to generate economic growth. At the national level, the government has attempted both to create winning companies and to rid the economy of unprofitable and inefficient enterprises. More importantly, government policy gradually allowed companies to compete freely in most markets. For a country bereft of capitalism and entrepreneurship, over the course of one generation China’s major markets became highly competitive and hundreds of thousands of Chinese

Since 1978 in China, foreign direct investment has served as a driver of change that has brought the country into the modern economic world.

Mao Zedong had shut out the “foreign devils”—Europeans, Japanese, Americans and other outsiders. He created chaos in an economy that was long on suffering but short on foreign currency, technology and capital.

In this detailed account, Dick K. Nanto explores how foreign companies came in to fill the gaps in China’s economy and helped it to become a manufacturing marvel. He focuses on topics such as how:

• Industrialization has created a socialist economy with Chinese characteristics that are reflected in industrial policy, governmental institutions, state-owned enterprises, the push to climb the high-technology ladder, indigenous innovation, and the drive to create more national champion companies.

• Foreign enterprises are now being squeezed as Beijing seeks to replace them with companies of its own.

Businesspeople, entrepreneurs, international business students, politicians, and anyone interested in how things get done in China will find engaging, informative, and comprehensive information in China’s Dance with the Foreign Devils.

Dick K. Nanto, PhD, is an economist retired from the Congressional Research Service where he provided economic analysis for the U.S. Congress on China, Japan, Korea, and on international trade and finance. He received his PhD degree from Harvard University and has written extensively about Asian economic issues.