God and the Human Environment 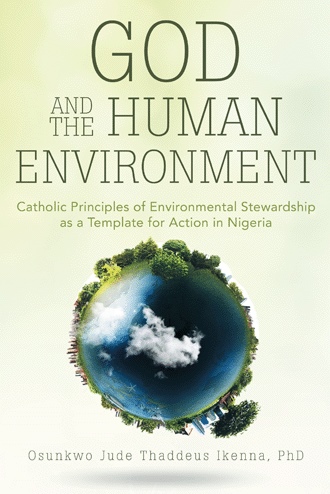 "The greatest environmental challenge in Africa today is the lamentable ignorance regarding environmental issues and principles that should regulate environmental behavior. In recent years religious thinkers of diverse shades have been confronted with the problem of the role of religion in the face of current environmental challenges. One of the Christian responses to these challenges is the development of the type of theologizing called “eco-theology”. Theology is now exploring all its three definitive modes: theology as proclamation or dogmatics (Revelation and Church), theology as correlation (Culture and Dialogue), and theology as advocacy (the poor and the environment) [Ray (ed.), Ecology, economy, and God: theology that matters, 3]. Gaudium et Spes asserts that “…although we must be careful to distinguish terrestrial progress clearly from the development of the kingdom of Christ, such progress is of vital concern to the kingdom of God, insofar as it can contribute to the better ordering of human society” [GS 39]. Any credible theologizing that considers the environmental challenges that face humanity today must develop theological core principles upon which environmental ethics must hinge. The environmental challenge today must, therefore, be turned by theology into an opportunity to echo these principles and redirect humanity to positive environmental behaviors. Hence, environmental concerns today are not only technological and economic but also theological and moral [Edwards Ecology at the heart of faith, 1].

There is, however, an ideological battle and confusion in the discourse on environment; and the real stumbling block in arriving at an objective cause-effect assessment of environmental issues is the interplay of forces and fisting of muscles between economic interests, environmental fanaticism and genuine concerns for environment. Many ideologies of political and economic orientations compound the problems. It is a fact that while some groups (out of selfish political considerations) either deny or underestimate the ecological problems confronting the modern world, others (for fear of not continuously maximizing their profits on the economic level) continue to pollute the environment, and sometimes with false theories that try to persuade whoever wants to believe that the situation is not as bad as being trumpeted; Still more, others fanatically hold to the often exaggerated view that divinizes nature and reduce human persons to an insignificant element in creation. In this unfolding environmental debate and the so many conflicting voices and ideologies, this book intends to contribute to environmental scholarship by clarifying and indeed articulating the Catholic Principles of Environmental Stewardship, its biblical, magisterial and doctrinal principles.

In the face of the so many conflicting voices and ideologies today on environmental issues which revolve between the economic and the power blocks, there is a great need to re-present the unmitigated Catholic Principles of Environmental Stewardship to her members and to the world. God and the Human Environment presumes to have done that. Confronted with a decaying environment that seems to be the business of non due to a travesty of development and in the face of a global crusade to save the environment which must be translated into concrete contextual projects in the spirit of “think globally and act locally”, there is an urgent need to galvanise citizens to the fact that the safeguarding of our Earth is part of the divine plan for creation and an aspect of our Faith. God and the Human Environment believes to have done that. And in the face of the persistent calls by the Magisterium of the Church in recent times that Particular or Local Churches engage in environmental matters in line with her project of holistic evangelization, the Catholic Church ought to be challenged to translate the Church’s environmental principles into concrete contextual social engagements. God and the Human Environment hopes to have suggested some of the directions to follow to reach this goal".

God and the Human Environment: Catholic Principles of Environmental Stewardship as a Template for Action in Nigeria brings into conversation the Church’s theological reflection on the mandate to care for God’s creation and the circumstances of the environment in Nigeria. In vivid terms and with systemic thinking, Fr. Jude Osunkwo, a theologian who specializes in Environmental Studies and Pastoral Catechesis, explores the biblical, theological, magisterial, and doctrinal bases that underlie a faithful response to contemporary environmental challenges.

After setting the stage with a summation of the issues and a survey of significant ecclesiastical statements on the topic of the environment, God and the Human Environment addresses Catholic theological principles of stewardship, Christian responsibility, and the ethics of development. Then the discussion turns to the environment of Nigeria, assessing its current state and reviewing the causes and consequences of environmental challenges before proposing pastoral responses for the Church. Finally, some chapters address likely developments in Nigeria and the Church. An extensive bibliography and several appendices provide additional support.

God and the Human Environment is a rigorously researched and passionately presented exploration of the issues growing out of the environmental circumstances Nigerians currently face. Whether you live in Nigeria or count yourself as a member of the Catholic Church and live somewhere else, God and the Human Environment explores a topic that promises to make a difference in your life and to protect the part of the environment that God has created for you to tend.

Osunkwo Jude Thaddeus Ikenna, PhD, is a priest of the Catholic Diocese of Orlu, Nigeria and an Alumnus of the Pontifical Urban University, Rome. He holds a doctoral degree in Theology. He, also, holds a Masters degree in Pastoral Catechesis, and a Bachelor degree in Philosophy. He has authored other books: Reflections for daily Living; Handbook Manual on Marriage Preparation and Family Apostolate ; and Simple Catechism for Youth and Young Adults. He currently serves in the Archdiocese of Boston, Massachusetts as a "Fidei Donum" Priest.