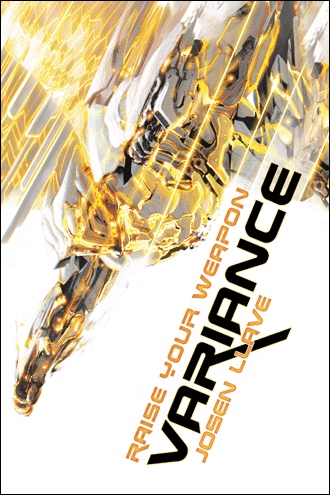 HE WAS THE ONLY UTOPIAN traveling toward danger. He should not have been there.

Paul Benedict sprinted on a smooth grass field as sleek outbound trains zipped beside him and transport ships thundered above. In organized lines, millions of people were walking away from the burning structural fragments plummeting from a nearby tree, a five-thousand-kilometer-high conical archology. The fragments broke through a layer of clouds and thumped against the tree’s sloped crystal-white facade. Bright red explosions highlighted the clouds.

He slowed to a jog as he approached a crowd. Having commuted and sprinted for hours, he straightened his blue polymer Azurian jacket. Those around him donned their best outing attire, perfectly shaped and colorful polymer sundresses and suits, in addition to their smiles and unshakable happiness. Paul was not smiling.

In the distance, the tree fragments whistled and crashed into the ground. The impacts shook the earth under his feet. Everyone else continued walking away. He paused, petrified at the rising dust cloud.

What am I doing? Someone else can save Azure, right? He wished he could avoid adapting to his newfound emotions of anxiety and doubt.

His Visuals, the neural-optical interface that projected images in three dimensions directly onto his visual cortex, flooded his view with data on translucent virtual panels. The hazard-recognition program highlighted the dust cloud and tracked the trajectories of falling debris. It warned him to evacuate the area. His medical interface ordered him to relax and breathe.

Breathe. As he took a deep breath and exhaled, another warning appeared: “Danger. Consistent atypical Utopian conduct. Cellular Infinity unable to maintain immortality and perfection. Remain in place for evaluation.”

He brought up the profile pictures of his wife, Amaryllis, and his two daughters, Statice and Lily. Like the fire in the sky, Amaryllis’s wavy auburn hair contrasted with her ice-blue eyes and her silky, smooth skin. Statice was an adolescent copy of Amaryllis, except her pale skin resembled the complexion of his fear-stricken face. Like the people around him, Lily donned a smile that stretched from cheek to cheek, except her smile was the most beautiful smile and could bring him peace.

Distant rumbles and explosions brought him back to reality. Through a telepathy interface called Audials, Paul Audialed to his family, “I received the warning.” Chills ran through his body. He shuddered at every explosion and rumble in the distance.

Amaryllis appeared and replaced her icon. She Audialed, “You are brave. Just follow the path. They’re attempting to negotiate with one of the scouts right now. This is our best chance at getting any viable data from the Crimson armor.”

Statice, their older daughter, leaned forward. “You have fifteen minutes after the final warning before the medical drones abduct you. Without the data, we can’t engineer the battle suit.”

Paul had expected such an informative and accurate response from her—something he did not need.

Lily’s eyes gleamed as she stepped in front of Statice. “We’re in this together, Dad.”

Paul could only see Lily’s eyes from the camera’s view, but they told him everything she felt—hope. It was exactly what he needed for motivation.

He nodded. Don’t stop. He moved the images aside to his peripheral view. Amaryllis prescribed a path through Visuals, and he sprinted toward the base of the attacked tree.

After sprinting for three kilometers, he reached a dusty area of rubble and craters. For the first time in his life, he noticed a layer of perspiration on his forehead. He had never sweated before. Deformed pieces of metal covered in dirt mixed with blood caught his attention. As he stepped closer to inspect in disbelief, the air burned his nostrils.

Also for the first time in his life, he coughed and heaved, spitting saliva and stomach fluid. White dust clumped on his forehead. He scanned for falling debris. A layer of clouds flowed around the tree with several breaks that revealed the damaged upper levels.

Paul Benedict is not like his fellow Utopians, immortals who live in absolute peace and love. He possesses the will to fight back, and he knows he must do so in order to protect his wife and daughters.

When alien scouts terrorize Paul’s planet, he and his family work together to engineer a nonlethal battle suit designed to stop the attacks. The source of the invasion is a man named Shadow who is intent on eliminating the Utopian race, whom he calls “violators of God’s power of life.” He is also the game master of Divine Might—a gladiator game that may represent the Utopians’ only hope. Using his invented suit, Paul embarks on a journey to gain mercy for his race by conquering the game, in which the champion’s wish comes true. Only time will tell if he will survive and manage to do what is right when everything around him is wrong.

Josen Llave is a project engineer in the oil and gas industry. He holds a bachelor of science degree in mechanical engineering from the New Jersey Institute of Technology and was an infantry sergeant for the US Army. He and his wife have two children. They live near Baton Rouge, Louisiana.