Book One: The Bluffs of Baraboo 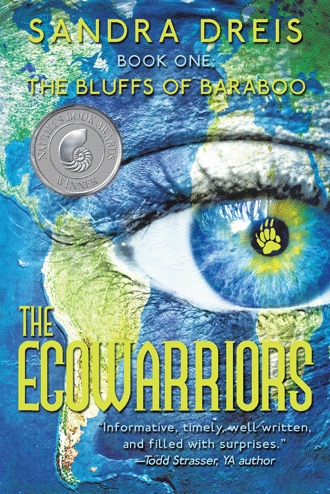 On rare occasions, a writer makes a first appearance on the literature scene and the reader feels the excitement of meeting a new friend. In her debut novel, The Ecowarriors, Sandra Dreis creates young characters with voices that ring true and a story that is perfectly timed to entertain. Setting the fantasy against the background of the all-too-real problem of fracking is nothing short of brilliant.

—Leigh Somerville, Author, It All Started with a Dog (trilogy, Second Wind Publishing)

Davie Wyatt, born into a family of scientists, is forced to imagine a world without Wisconsin. Uncontrolled sand mining is taking over the state, threatening to destroy the land’s natural beauty. Two badgers, leaders of a royal underground dynasty, choose Davie and his buddies—Carl, Sharon, and Melissa—for a vital mission. With the powers given to them by the badgers, the four youths must defeat an evil force that will rise from Devil’s Lake on the eve of the Winter Solstice . Suddenly, vacation plans morph from the ordinary to the fantastic as the four experience a daring cross-country ski excursion, uncover clues from petroglyphs on a cave exploration, and survive a bizarre ice-fishing adventure. Will they be able to put these clues together in time? In the background, Grandpa John, a retired geologist, and his old friend, Avery, an Ojibwa storyteller, play important roles. As the young eco-warriors find themselves with the ability to fly, they face the enemy at Devil’s Doorway, a landmark rock formation high up on the dangerous cliffs over the lake. Battling the forces of a giant sand monster, the teenagers will discover the truths that lie—not only below the surface of the Devil’s Lake—but within themselves.

Sandra Brodkin Dreis is a native New Yorker and graduate of Hofstra University. She has a multifaceted and eclectic career in writing, teaching, and the performing arts. Dreis lives in Winston Salem, North Carolina, with her two dogs. This is her debut book.