Native American Soldiers Who Fought in the Civil War 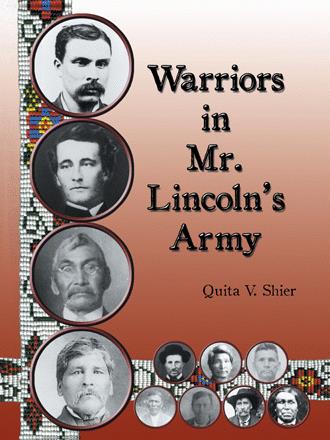 The American Civil War ended 152 years ago. Of the military men who served in this drama of untold suffering, little has been written about the experiences of the American Indian (indigenous) participants. Indigenous soldiers and sailors from various states served bravely for both the Union and the Confederacy.

One such unit for the north was Company K of the First Michigan Sharpshooters called the all-Indian Company. Company K was unique because it was the only company in the entire sharpshooter regiment, and in all other military units in Michigan, that had only indigenous enlisted men on its roster.

In Warriors in Mr. Lincoln’s Army, author Quita V. Shier offers a comprehensive profile study of each officer and enlisted American Indian soldier in Company K, First Michigan Sharpshooters, who served in the Civil War from 1863 to 1865. The profiles of this all-Indian Company include information taken from military service records, medical files, biographical and family data extracted from pension files, and personal interviews with some of the soldiers’ descendants.

The profiles feature the infantrymen known as grunts, who bore the burden of fighting, and dying in this conflict, and the officers who led them into battle. Shier shares insight into who these fighting men were, who loved them, and what happened to them.

Quita V. Shier is a graduate of Illinois Wesleyan University and a resident of Michigan who has a lifelong interest in American Indian cultures and life ways. She taught a course about Michigan Indian history and culture at Delta College, University Center, and is a frequent guest speaker.