The Hard Decisions One Man Faced for the 2012 Presidential Election 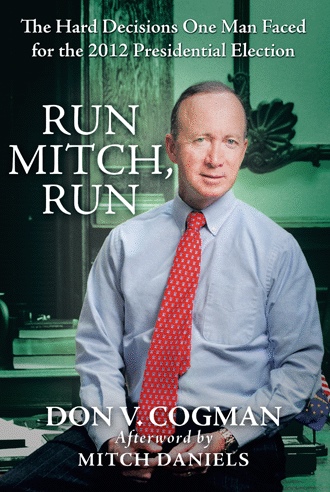 The day was cold in Indianapolis, December 14, 2010. But “the group” had just finished a two-day strategy meeting in the residence of the governor of Indiana, and we were warm, even hot, with enthusiasm and optimism.
After nearly a year of indecision and uncertainty, Governor Mitch Daniels had answered the last question of the day put to him by Tom Bell. “So, where is your head?
"Are we going to do this or not?”
Mitch answered, “I’m 80 percent there.”
We were all stunned and ecstatic. He said the family was still an issue, but he didn’t see anyone else who could do it. He was convinced we had the right message and believed it just might be possible.
The group, the same eight people who’d first gathered in my living room in Scottsdale, Arizona, at the beginning of the year, had just finished a two-day meeting where we talked issues, scheduling, personnel, financing, and a host of other items on which to focus as we entered 2011. We had come a long way since that first phone call in 2009 when Mitch told me, “That is the dumbest idea you’ve ever come up with,” and proceeded to completely dismiss the idea of considering a run for the presidency.
Most of the group was leaving for the airport, but I had already planned to stay the night to have dinner with Mitch and his wife, Cheri. The last decision we made at our meeting was to have me bring up the subject with Cheri at dinner. We were to have a serious conversation about our yearlong efforts and why we thought this was his time. I had known Cheri almost as long as I had known Mitch, so I was the elected person to have what we thought might be a pivotal conversation.
As the meeting was breaking up, Mitch asked me to join him downstairs in the study when everyone had departed. As I entered the room with the fire blazing in the fireplace, he closed the door and said he didn’t want to say this in front of the group because everyone was so enthusiastic, but he thought the family was a major problem—perhaps a greater problem than he had even thought several months ago.
My warm feeling immediately turned cold. All of us had concluded our meeting with a feeling that this really might be happening. Now, something was telling me we had an obstacle that was real and perhaps unrelenting. I asked if it was Cheri or the girls or all of the above. He replied all of the above. I asked what he thought I could say that would change their minds, and he said he didn’t know.
I then suggested it might be better if I met her before we had dinner and had a conversation just between us. I thought perhaps the talk might be more productive with just the two of us, and he agreed. So we set it up, and I returned to Al Hubbard’s, where I was staying, and began to prepare.
Many highlights occurred in this journey with Mitch, but this one was perhaps the most critical of all. How do you convince a spouse and four children, grown children, that our country needed their husband and father? It was a decision that would potentially change their lives forever.
That was what consumed my thoughts as I walked into the residence three hours later to have a conversation with my old friend, Cheri Daniels.

What does not happen in politics can be as important as what does happen. This was the case when my friend Mitch Daniels, then Indiana’s much-admired governor, decided against seeking the Republicans’ 2012 presidential nomination. This book is a fascinating look at the interplay of the personal and the political, a story of one of modern history’s might-have-beens.
George Will
Syndicated Columnist

This is a fascinating history of the eight people who worked tirelessly to bring to life a 2012 presidential candidacy on behalf of Governor Mitch Daniels. Highly competent, accomplished, visionary and with an extraordinary common touch but lacking an ego driven ambition- the perfect “anti-Obama”- Daniels could have been a game changing candidate had he chosen to run. Reading this story, it is hard not to conclude that the country would have been the real beneficiary of a Daniels candidacy.
Patrick H. Caddell
Fox News Contributor
Pollster and Political Strategist

The increasingly pernicious nature of our political campaigns and media coverage of candidates is driving some of our most talented people out of the process. ‘Run Mitch, Run’ takes readers behind the scenes on just one such case, and why then-Indiana Governor Mitch Daniels, one of the most qualified people to lead our country, decided that his love of family took precedence over his willingness to seek the presidency and serve the country.
Charlie Cook Editor and Publisher,
The Cook Political Report
Political Analyst,
National Journal and NBC News

Any American , Republican or Democrat, will enjoy this book, but I guarantee you it will also break your heart . You’ll read why a qualified, experienced, successful public servant who is a good, good man, decided he just could not run for President of the United States. And, just at a time when both parties need leaders like Gov. Mitch Daniels to offer themselves for service in high office.
Erskine Bowles President Emeritus,
University of North Carolina,
Former White House Chief of Staff

In 2009, a newspaper columnist’s question prompted Mitch Daniels—perhaps the most successful Republican governor in the nation—to embark on a passionate, arduous, nearly two-year journey to make the most difficult decision of his life: whether or not to pursue the presidency of the United States.

Don V. Cogman, a corporate and governmental affairs executive, shares a story that deserves to be told—the story of what it takes to run for President of the United States, the choices a potential candidate faces, and the hard decisions a candidate must make during the process. As he offers a compelling, chronological glimpse into Daniels’ quest to make the right decision for not only himself and his family but also his country, Cogman reveals intriguing, behind-the-scene details as Daniels, with the help of eight devoted individuals, wrestled with the pros and cons of a presidential run during a unique time in America’s history.

Run Mitch, Run shares a political leader’s journey through a major, life-changing decision as he contemplates whether or not to run for President of the United States in 2012.

Don V. Cogman began his career as chief of staff to U.S. Senator Dewey F. Bartlett (R-OK) where he first met Mitch Daniels. Cogman became President and COO of Burson-Marsteller, one of the world’s leading public affairs/marketing communication firms, and then served as Executive Vice-President of advertising conglomerate, Young & Rubicam, Inc. in New York. He recently retired as Chairman of the PulsePoint Group, a management consulting firm. He and his wife Susie, reside in Scottsdale, AZ.