A Story about Life, My Child’s Death and What Forever Really Means 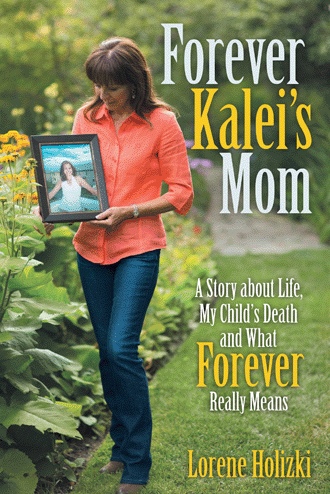 The unimaginable is always met with the same word—no. The response does not change no matter who we are or the circumstances surrounding the event; our first instinct is to verbally push that information away. My reaction was no different. At eleven in the morning, my office phone rang. A man’s voice asked to speak to Lorene Holizki. I confirmed he was talking to the correct person. He identified himself as an RCMP constable.

My initial thought was annoyance, Darn it, Kalei! You just can’t make it through one day without causing some sort of problem. How am I going to deal with this and my work trip at the same time? Then my brain processed something that sent the first sliver of fear through my body.

It was the constable’s tone. It did not fit the scenario of a policeman reporting bad camping behaviour or a minor accident. I thought, Oh, God, what if it’s more serious? She could be lying in pain with a broken arm—or worse for a dancer, a broken leg! Before I could ask how Kalei was, I heard these words, “There has been a bad car accident.”

A feeling similar to my experience on the train platform that morning started to squeeze my chest. I could not breathe. I pushed my chair back from my desk and stood up.

I wanted to run, but I was frozen in place. At that moment there was no office, no office noise and even no phone—just two voices so connected it was as if we were alone in the world.

One voice was filled with frightening gentleness; the other carried the first vestiges of hysteria as I asked the question that would not wait, “How bad is it?” I could hear a pause before he forced out, “I’m not going to lie to you. It’s very bad.” I let out a scream.

From what seemed like somewhere far away I heard the constable say, “Your daughter is at the Foothills Hospital.”

I do not know if I kept screaming or if I was just hearing the echo from that first one. Either way, the constable had to yell into the phone to get me to hear him, “Ms. Holizki! Stay where you are! We’ve contacted your brother, and he is on his way to take you to the hospital.”

After hanging up the phone, I felt a glimmer of hope as I thought about his last statement. She’s in the hospital! That means Kalei is still alive! But it was quickly followed by more panic as I realized it must be really bad for the police to go to the trouble of finding a family member to drive me to the hospital. Oh my God, oh my God! What does that mean? I thought. My mind went wild looking for an escape from the nightmare I was in.

Taking a deep breath, I said to myself, “Okay, just settle down. She might be hurt badly, but you can handle that. We will deal with whatever we have to deal with. As long as she is alive, we can handle anything.”

I then tried to reach for Kalei’s life force. Since she was born, whenever we were apart and I needed to connect to her, I could touch her spirit with my mind. It was as if there was a physical connection that allowed me to be with my child no matter how far away from her I was. I tried to capture that feeling. I felt nothing.

Then I jumped to full-fledged denial. I thought, They must be wrong. Kalei is okay, and this is all a terrible mistake. Someone is going to get an earful when they realize they put me through this agony for nothing!

“Kalei!” I screamed, “let me feel you! Let me know you are still here!” Nothing. I felt nothing.

While my head fought against what the constable was trying to prepare me for, my soul already knew the truth. Without hesitation, I turned and reached for my office chair, hefted it into my arms and started walking toward the window in my office. I planned on throwing the chair out my 25th-floor window and following it to my death.

Just as I prepared for the big heave ho, I thought, What if my instincts are wrong? Maybe Kalei is still alive and is fighting for her life. Oh my God! What if she needs me to help her fight? I have to go to her! My child needs me! Sobbing uncontrollably, I put down the chair and walked out of my office.

No one—and I mean no one—came out of any of the offices as I made my way down the hall to tell my boss I had to leave. The sounds I made as I stumbled down the hallway must have been terrifying because the few people who looked up had fear etched all over their faces. They knew really bad when they saw it, and I, with mouth open in a silent-scream grimace and tears streaming down my face, reflected that kind of bad.

As instructed, I waited for my brother with a work friend at my side for what seemed like an eternity. A million thoughts screamed through my brain. In the end it was the question, “Will she die before I get there?” that forced me into action.

With tears streaming down my face, I said to my friend, “I have to go. She could die while I am standing here waiting. I have to go. Watch for my brother, and when he gets here tell him I already left for the hospital.” My friend did not try to stop me, because I am sure that he knew that I would have hurt him if that was what it took to get to my daughter.

On the train ride back to my car, I felt the same lost feeling I had that morning. The life and sounds around me did not register; only the sobs that kept coming from deep inside me could reach my consciousness. The noise I was making had the people on the train throwing worried glances my way. I knew the picture I presented frightened them, but I could not help myself. It was impossible to keep the emotional terror I was going through inside my body.

During the drive to the hospital, I cycled through a series of calm- panic emotions. Sometimes an eerie sort of calm would come over me as I convinced myself Kalei was hurt badly but she would live if we fought hard enough. Then that calm would disappear and panic would return as I struggled with not knowing what had happened to my child. I thought, I need to get a better understanding of what bad means, so I turned on the car radio thinking the accident would be on the news if it was significant enough to be newsworthy. If it was being reported there, bad meant really bad.

Seconds after I turned up the volume, the voice on the radio said there had been a terrible car crash west of Cochrane. Four people were dead at the scene and two were alive but in critical condition. “Please, God, don’t let it be Kalei!” I chanted this over and over again as I made the 20-minute drive to the hospital. It took everything I had to fight off the panic that threatened my sanity.

When I ran into the emergency department, no one would make eye contact with me. The people in the waiting room sat with bowed heads. As my eyes met those of the emergency room nurse, I felt uncomfortable with what I saw. She wore what I came to call the I-ate-something-rotten look.

People wear that look when they are about to give, hear, or be around unimaginable information. When it is reflective of their worst nightmare imaginings, it does not matter if you work in an emergency room or a coffee shop; there is no hiding that look.

The nurse immediately hustled me off into a private waiting room.

How naïve I was at the time. I had no idea that you are taken to one of the private rooms in the emergency department when they expect you to crash and burn in a really big way. Why? They are about to share dead or dying information with you and that kind of news is best given privately, away from the masses in hospital waiting rooms. Be very afraid of nice rooms in hospitals for they foreshadow nothing good.

In the space of a heartbeat, author Lorene Holizki was thrust into a world she did not know or want. On August 20, 2001, the unimaginable happened; her 16-and-a-half-year-old daughter, Kalei, was killed instantly in a head-on car crash.

Desperate for insight into the emotions that threatened to crush her from the inside out, Holizki learned everything she could about her different world and new life. Along the way, she discovered there was an entire lifetime housed within the world of grief. In Forever Kalei’s Mom, she offers a deeply personal analysis of death and her journey through the grieving process. Divided into three sections, this memoir gives a sense of Holizki’s relationship with her daughter, discusses the inner turmoil of the unimaginable grief and shares how grief and the future learn to cohabitate.

At times heartbreaking, Forever Kalei’s Mom discusses the lessons she has learned during the process. It presents an honest look at the chaotic mental and emotional grieving journey from Holizki’s perspective as a mother.

Lorene Holizki has written and published several technical papers about the grain-transportation and natural-gas industries. She is a senior business analyst in natural-gas processing and transportation in her hometown of Calgary, Alberta.