From Communist Romania to the Oval Office 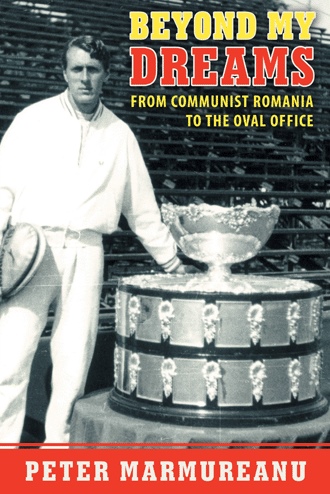 When Peter Marmureanu started learning tennis in communist-held Romania, he was ten years old, playing barefoot on clay courts, swinging a wooden paddle that served as a racket. Eight years later, as a member of Romania’s Davis Cup team, Marmureanu was traveling side by side with Ilie Nastase and Ion Tiriac to the world’s capitals playing tournaments in Cairo, Monte Carlo, Paris, London, Moscow, and scores of other cities.

In Beyond My Dreams, Marmureanu recounts his life story and how he was forced to become a designated courier for the Securitate, traveling with packets of top-secret documents concealed in his racket cover for delivery to Romanian embassies. In a last-minute flight to freedom that sounds like an espionage thriller, Marmureanu narrates how he made his escape. But even in America, where Donald Rumsfeld and President Gerald Ford helped secure his citizenship, he lived for many years under FBI protection, carrying a handgun for his own safety, knowing the danger that loomed over Romania’s defectors and what might happen if he ever went back. And yet, for the sake of his family, Marmureanu risked a return—witnessing, firsthand, the initial moments of insurrection preceding the fall of an evil regime.

In this memoir—filled with intrigue, courage, and defiance—Marmureanu tells how he escaped one of the most repressive regimes on earth—the incredible but true adventure of one man’s flight to freedom.

Peter Marmureanu is director of tennis at the Ballantyne Hotel, Charlotte, North Carolina, where he lives with his wife Linda. Marmureanu played in the Davis Cup for Romania with Ilie Nastase and Ion Tiriac for fourteen years. After defecting to the United States, he coached the US Federation and Wightman Cup.