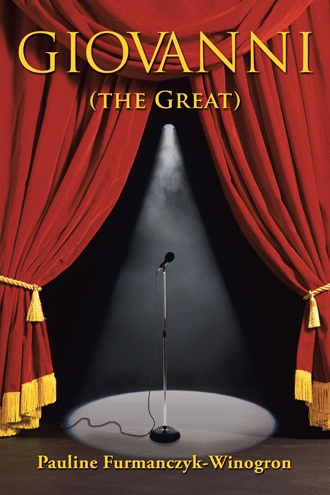 On a warm and lazy summer evening in a little Italian district on Empress Street, two very important things happened. Antonio D’Angelo got his first violin and………..Giovanni was born. Outside the hallway of a modest three-story rooming house, a light flickered underneath a crack in the doorway. As it danced, it reflected in the polished hardwood floor which Mr. D’Angelo, the landlord, had just refinished. “For he’s a jolly good fellow, for he’s a jolly good fellow, for he’s a jolly good fe – el – low…..which nobody can deny!” The voices and cheers of enthusiasm on the main floor echoed down the hall as Antonio blew out the candles on his birthday cake. Today he was ten, and there was something very different about this birthday. Antonio couldn't explain it, but there was magic in the air, and he knew this was going to be an incredible evening. Mama placed her hands on Antonio’s shoulders. “So, little Antonio….well, maybe-a not so little, you are getting so much bigger now aren’t you?” She said shaking her head in disbelief at how quickly her son was growing taller into a fine young man. “You just close your eyes and I’ll be right back.” Antonio shut his eyes as tightly as he could. He couldn’t help peeking just a little out of the corner of his eye though, as mama entered the room and placed a large package on his knees. “O.K!” Papa announced. “Go ahead and look now.” Antonio smiled as he gazed upon the mysterious gift before him. It was not wrapped in the same colorful papers and ribbon like the rest of the gifts on the dining room table. This one was wrapped in brown packing paper. It was tied neatly with string that formed a single small bow and bore a large number of FRAGILE stickers on it. The paintings on the stamps were rich and beautiful and clearly revealed that this package was all the way from Vienna. Antonio looked up at his parents with wild excitement. “Oh mama, Papa, it couldn’t be!” “Go on darling, open it….open it!” Mama smiled licking some chocolate icing off her wrist as she began to slice the cake. Antonio’s eyes darted everywhere as he inspected the box from all angles. He immediately set to work, opening it very carefully knowing that there must be something awfully special inside, perhaps something he had been hoping to get for a long time. The dim light didn't affect Antonio’s eyes in the least as he recognized the distinct shape of the gift at once. “A violin! A violin!” He shouted as he lifted the hand-crafted case from the box. The sweet smell of new leather filled the room as Antonio burst into joyous laughter. “Oh mama, Papa, it’s………perfect!” Removing the exquisite instrument from its resting place, Antonio caressed the strings and ran his hands over the smooth, shiny lacquered finish. He leaped over to his parents and hugged them over and over. Mama giggled as Antonio covered her bare arms up and down with kisses. While Antonio marveled at the violin, papa retreated to his favorite chair in the living room and reached for his pipe which he kept in the top drawer. “So, this is what you always wanted no? You will do us proud I’m sure,” he said, tapping the pipe on his shoe to loosen the tobacco. “Oh I will, I will!” promised Antonio. Papa continued. “Well in that case, I have another little surprise that might interest you.” Papa grinned with his left eyebrow perched over the other, the way he usually did when he was up to something. “I spoke-a- to Mr. Santini about you yesterday, and we discussed some lessons for you…no? He said he has –a- just one opening for this September. Can you believe it mama? Our son, lucky enough to be taught by the great Fernando Santini!” At this amazing news, Antonio’s eyes struck up like matches, but just as quickly, the flames extinguished. His head sunk down into his chest. “But papa,……my hands…….what will he say about my hands?” That same evening, just down the hall, Mrs. Ciccione was rocking her new little baby. “Isn’t he beautiful papa? Isn’t he perfect? Papa Ciccione beamed as he gently caressed his tiny little son’s head. “Perfect.” He half whispered “Perfect, and Giovanni is a perfect name. He looks like a “Giovanni” doesn’t he?” “Oh yes!” Mama said as she snuggled the little bundle up to her cheek and softly sang him the lullaby she had sung to all her children when they were just born. The tender moment was interrupted when Papa heard the other children on the opposite side of the doorway, waiting impatiently to see their new little brother. They pressed against the door so tightly, that when papa finally opened it they burst in like water shooting from a crack in a dam, tumbling to the floor in all directions. “Children, children quiet. Please! Do you not see the new little bambino? We don’t want to wake him with any noise now, do we?” “No papa.” The eleven children chanted in unison. “Very well then, come and see our new little member of the Ciccione family.” Papa motioned. The large number of children surrounded mama’s bed, encircling it like the spindles of a cradle. Teresa, the eldest of the children, gently kissed her mama’s forehead and extended two longing arms. “Mama, can I hold him?” “Of course you can my dear.” Papa said lifting him tenderly and placing her tiny new brother into her arms. “Carefully Teresa, this is our new bambino. His name is….. Giovanni. And so it began. The two young lives would become indelibly intertwined. And the whole world would soon know their names.

On a warm and lazy summer evening in a little Italian district on Empress Street, two very important things occur: ten-year-old Antonio D’Angelo receives the birthday gift he always wanted: A new violin. And down the hall, the Ciccione parents receive the gift of a new baby boy who they name Giovanni.

Determined to become a great violinist, Antonio overcomes a physical handicap and quickly reaches a skill level far beyond his years, despite his jealous violin instructor’s efforts to prevent Antonio’s progress at every opportunity. When Antonio discovers that his biggest fan lives right in his own house, he and Giovanni form an unbreakable bond held together by their passion for music and singing. As the pair embarks on a quest to attain their dreams of performing on the big stage, they carry out hilarious antics, learn life lessons, and share countless heartfelt moments as they discover that sometimes the journey is as much fun as the fi nish line.

Pauline Furmanczyk-Winogron is the eleventh child of artistic and musical Polish immigrants. Pauline’s love of children and writing inspired her to write her first novel, which has proved to be a hit during her live classroom readings. Her family-friendly stories are grounded in positive messaging. Pauline and her husband, Steve, have two children and live in Ottawa, Canada.