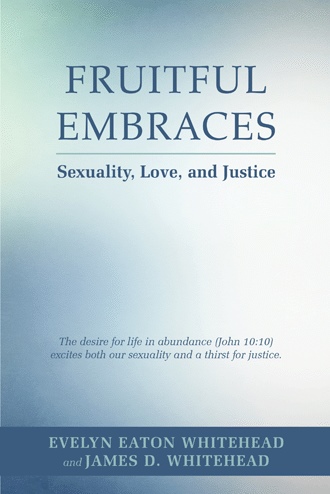 At birth we are launched into myriad embraces. The new-born baby survives by being held and warmed, cleaned and coddled. Doting parents caress the infant with delight and affection. Grandparents, siblings and nannies multiply the touches that enfold the growing child. As children we are blessed with this intimate contact. Good touch signals that we are not alone, and this connection strengthens self-confidence. This early season teaches two essential lessons upon which our experience of mature sexuality and committed love will depend: dependency on others need not diminish us; vulnerability is part of our charm.

Christians today are returning to a richer appreciation of the goodness of creation: how the sights and sounds, the tastes and touches that give shape to our world are gifts of God–thrilling attunements to creation, even if these delights may sometimes be distorted. A religious faith founded on the Word made flesh should be good news for the body. For many contemporary Christians, the spiritual journey includes a wholehearted embrace of personal embodiment, expressed in the sensual bonds that unite us with others in justice and love. (From Chapter One)

Sexuality’s Link with Justice
Sexuality is an essential dynamic in individual maturity, in interpersonal relationships, and in society as a whole. Sexual sharing with a beloved partner shapes and strengthens the mutual commitments of marriage. Here sexuality and justice are linked in practices of respect, mutuality, and compassion. But sex is also recruited into the service of coercive and destructive behavior – from the soft power of sexual harassment and internet pornography to the hard power of sexual domination and rape as a strategy of war. In these experiences of sexual constraint and violence, sexuality loses its connections to both justice and love. (From Chapter Six)

The early 20th century brought with it extensive research in biblical, historical and liturgical areas of the Church’s life. This research awakened Christians to an extraordinary variety and fluidity in their belief—a pluralism that had been long forgotten, all but erased by the prevailing myth of an unchanging, monochromatic belief system. Today we are more aware of what philosopher Charles Taylor has called “the future of our religious past…which is now available for us to retrieve.” The rich resources of our past are being remembered and made newly available to us—to appreciate, to question, and to reclaim as our own.
Reviewing of the centuries-long development of Christian spirituality, we rediscover a decisive moment early in the theological tradition. This turning point has largely been overlooked, even forgotten for many centuries. But its significant influence continues. The moment arrived as the fourth century was coming to an end.
At that time two great theologians, on either sides of the Mediterranean, were developing very different approaches to Christian spirituality. Gregory of Nyssa was the married bishop of a small diocese in eastern Turkey, a member of an illustrious family. In the year 391 Gregory initiated his commentary on the Song of Songs, a biblical text that celebrates Eros as the desire that leads the soul back to its Creator.
This same year Augustine of Hippo began his ministry as a priest; he was soon to be consecrated as a bishop in North Africa. Augustine was twenty years younger than Gregory and would outlive him by many decades. Augustine died in 430 at the age of seventy-five, leaving his autobiographical Confessions as a spiritual legacy. His vision of the Christian life would become the dominant view throughout western Christianity for many centuries.
Augustine’s theological legacy is mixed. The Christian community continues to benefit from his brilliant discussion of the Trinity and his appreciation of humanity’s desperate thirst for God. Yet many Christians have inherited Augustine’s convictions concerning the shamefulness of sexuality and its inherent linkage with sin, as his biased vision of sin and grace became the orthodox understanding in western Christianity.
Today we are blessed with other visions of grace and sin, of the role of the senses and the emotions, of beauty and ordinary pleasures in the spiritual life. Gregory’s wise and optimistic vision returns to us as “the future of our religious past.” (From Chapter Ten)

Compassion is an experience of intimacy. Ordinarily we think of compassion as commiseration: feeling the suffering of another person. But compassion has a more expansive meaning. With this emotion we enter into all the passions of one another—both delight and sorrow, joy and anger. By the bridge of imagination we cross over into another world of feeling. Like empathy, compassion gives us an uncanny capacity to participate in another person's inner world. We experience with other persons the excitement of their successes; we taste the sorrow that fills another's life. This extraordinary strength, which makes mutuality possible, enables us to enter another's life without intruding on her privacy or manipulating his emotions for own purposes.
This passion challenges the boundaries and barriers that make for a tidy social existence. Ensconced within the firm borders of our social standing or ethnic identity, we need not worry about the problems of others. Race, class, culture separate "us" from "them" and urge us to mind our own business and stay out of other peoples' affairs. But compassion transgresses these boundaries. We feel the anguish of the battered wife, and we sense the distress of those in prison. Suddenly, the hunger of the famine-stricken, the disorientation of the mentally ill, the frustration of the political outcast become experiences that are not alien. This is dangerous business. Such an arousal may lead us to question the barriers that separate us. Thus compassion often stands at the beginning of justice. Compassion leads us to recognize a relationship even with those who are not, on first glance, “like us.” This emotion reminds us of a kinship that we can easily miss.
We might think that compassion and sexuality would be friends, since both are passionate responses linking us with other people. But, in fact, a fear of sexuality often limits our compassion. Every community—religious and ethnic—develops rules about sexual conduct. The group we belong to instructs us on the importance of marrying our own kind. We are taught the styles of sexual sharing that are acceptable among us. We learn that those who are sexually "different" must be avoided, even feared.
This prejudicial attitude is being overcome. In the Christian community today we find recognitions of the kinship among homosexual, heterosexual, and transgender persons. Traditionally, religious discussions of sexual diversity often degenerated into conversations about "them," alien folk whose lives were consumed (it was said) in perverse and promiscuous behavior. These shadowy "others" were most emphatically excluded from our kind. Defensiveness distracted us from a simply truth, profound in its implications: we are the Body of Christ and some members of our body are transgender, lesbian and gay.
Arousal is the wellspring of sexuality for all of us. And for all of us these inclinations are filled with both promise and peril. For all of us, these arousals are subject to every conceivable perversion, as the human history of selfishness and sexual violence attests. For all of us, questions remain of how we will express our affection and respond to erotic arousal. We each face the challenge of finding a lifestyle and forging fidelities that are both adult and Christian. (From Chapter Eleven)

Sexuality and justice often seem odd bedfellows. Sexual embraces of intimacy and passion thrive in our private lives, while justice safeguards the laws and duties that govern the public realm. Yet intuitively, we sense there are deeper connections. Both sexuality and justice support the holistic ideal proclaimed by the early Christian writer Ireneaus: the glory of God is the human person fully alive.

Evelyn and James Whitehead combine professional expertise as a psychologist and historian of religion as well as personal experiences and extensive research to explore the interplay of sexuality, love, and justice on the spiritual journey today. While drawing on biblical themes and contemporary psychological insight, the Whiteheads examine modern experiences of attachment and vulnerability, marriage and friendship, compassion and sexual diversity, and the psychological and spiritual experiences of transgender persons—a new and often bewildering consideration for many Christians. Included is a reflection on a prophetic Christian ministry in support of sexuality and justice that illustrates the importance of moral awareness and sensual attunement to the world.

Fruitful Embraces utilizes Christian theology and effective pastoral ministry to explore the vital connections between sexuality and Christian spirituality and links between compassion and justice that will encourage anyone on a spiritual journey to open their hearts and minds to the extravagant diversity of creation.

Evelyn Eaton Whitehead is a developmental psychologist (PhD, University of Chicago) whose work focuses on spiritual development in adult life. James D. Whitehead is a theologian (PhD, Harvard University) who studies the interplay of religion and culture. In their shared career spanning forty-five years, the Whiteheads have co-authored over a dozen books on themes of Christian spirituality in contemporary life.