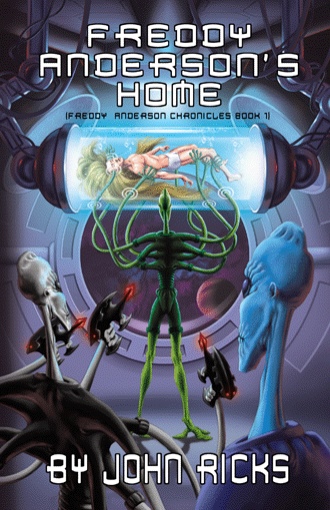 Prologue: I awoke having no idea where I was. I did know that I was in some sort of vat. I was immersed in thick clear liquid and there were translucent tentacles holding my body in the center. My energy was drained so I could not teleport out and yet; strangely, I was whole. The last thing I remember was the Mars base being attacked. A gigantic hole was blown in the dome over Mars base and our air was escaping. I was torn half apart from falling debris and bleeding to death. I had used most of my energies helping other victims of this devastating enemy and I was reduced to using normal means for healing myself. I was trying to stem the bleeding and make it to a special Blink Emergency Escape Ship, then I felt something grab me and all went black. Now that I was awake I could hear voices and see creatures that were unholy in appearance. Strange voices were speaking in a language completely different than anything I had ever imagined. And, they were speaking telepathically. A small green one, small, did I think small? It had to be seven feet tall and thin as a rail, with eight tentacles. Anyway, it said in a booming voice, “There, I have opened some of the doors in this ones mind. Now we will see much.” A large gray one, large being about two feet taller and twice as wide, asked, “Are you sure that this tiny little creature is the one that destroyed our Mother Ship?” Everything went blank, but the voices continued. The Green answered, “Yes Master. All the others, we captured and probed, pointed to this one ‘creature’ being the brains behind everything that has happened in the last ten or more of their years. He is fully responsible.” The big gray creature turned to another gray and ordered. “Have the fleet return home. Pull off the engagement. We will find out what caused this catastrophe, and if needed destroy this “Earth” and all it’s inhabitance.” He turned to the small green one and asked, “How long will this take?” “Master, I must start at his birth and work my way forward. I would guess, three of our days, or twenty two of their days at best.” The large gray ordered, “Then get to it!” “Yes Master.” I saw myself at age six, sitting, thinking, wondering why no one would believe me. Chapter 1: Freddy I sat back from my newest toy. I had built it from parts that were in daddy’s garage and with permission from my nanny. Now that I had it working, I wished I hadn’t. It was very clear that Earth was doomed, but who could I tell? I ran to my nanny and told her. “Nanny! Nanny! The world is going to end!” “Now Freddy, don’t exaggerate. The world is not going to end.” “But my new toy shows that it is going to end!” “That’s nice, dear. You go back and pretend some more.” Frustrated I went back to the garage. As soon as my daddy came home, I ran out to tell him all about my new discovery. “Daddy, the world is going to end! The world is going to end!” “Now Freddy, I’m sure you’re correct about this, but I don’t think we need to worry about it for a few million years yet. Now I have papers to grade so I need time alone tonight.” “But Daddy…” “No, Freddy, not tonight.” Mommy was the same and so were my friends. No one believed me. I sat there in silence after weeks of trying to get someone to listen to me, but no one would. I thought back on my short life trying to find out why no one would listen to me. I remembered everything as clearly as if it had just happened. Let’s see. I was born on a Wednesday. That’s no reason for them not to believe me. Mommy said that from birth everyone could tell I was different. My eyes were already open and I could focus quickly. My size was smaller than most full-term babies and I was pink and wrinkled. The only strange things were my eyes. The doctor committed on them. “I have never seen bright purple eyes on a baby.” This is different than other people. Purple eyes are an extreme rarity, usually mistaken for dark blue, dark brown, or nearly black. Why would anyone not believe me because my eyes were different?

Ten-year-old Dr. Freddy Anderson is a super genius capable of using his mind in incredible ways. After he is orphaned, the president grants him land near a military base and issues an order for an admiral to keep an eye on him. Even as he is relentlessly tailed by a Navy Seal, Freddy attempts to start over with a new family. Sadly, his journey is not easy as he is bullied, shunned, and loved by few. But what his adversaries do not know is that Freddy is a determined boy with amazing healing abilities. The government thinks Freddy is a threat to national security, not only because of his gifts, but because he invents innovative devices that make him attractive to their foreign enemies. When the government becomes too involved in his affairs and steals his inventions, Freddy takes extreme measures to protect himself and his future by unveiling his latest creation. But as Freddy proceeds with his plan, he is about to discover that another race wants him—and his knowledge—even more than the humans. In this science fiction tale, a child genius becomes the pawn for beings who want nothing more than to look inside his brain and determine how he can help them annihilate humanity.

John Ricks was born in Longview, Washington. After graduating high school, he joined the Navy where he spent twenty more years traveling the world. His degrees in liberal arts and management, extensive reading, and travel provide him with unlimited fuel for fantasy and science fiction dreams.