A Chuck, Yu, and Farley Book 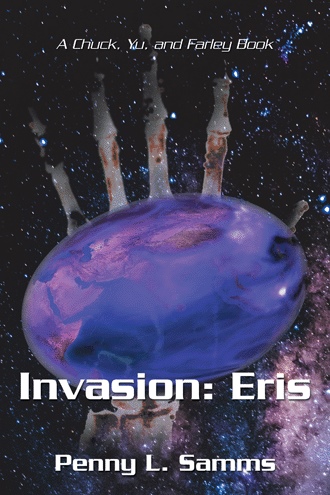 Chuck froze in his tracks as Farley moved stealthily down the stairs. Farley held up a hand holding Chuck to his spot and approached the front door, his weapon trained on it. Chuck motioned upstairs, his eyes widened questioningly. Farley gave the “okay” sign with his thumb and forefinger indicating that all was clear on the upper level. They had only to check the backyard when there was a sudden knock on the door, which meant that someone had been somehow, unbelievably, able to get past Grammy and Josh. Chuck whispered, “Grammy, what’s going on out there?” She didn’t answer but he could hear her yelling at someone. “I’m warning you, step away from that door and move on!” Chuck and Farley both strained but heard no one respond to her. “Grammy!” Chuck whispered more urgently. “Josh! Where are you? What’s going on out there?” Chuck moved to the window and peeked out seeing only Grammy in a combat stance pointing her cane at someone he couldn’t see. Farley tiptoed to the front door and pressed his ear against it. He could hear only Grammy as well. “Josh! Someone answer me!” Chuck raised his voice, no longer caring who heard him. Grammy suddenly began firing. Chuck and Farley heard three quick shots and were ready for anything. They had all agreed beforehand that if anything was going down, they would await instructions from Grammy or Josh before they stepped in. Chuck joined Farley at the door and put his hand on the door knob, ready to whip it open. Farley, being the better shot, was ready to fire when needed. “BLOW THE DOOR!!!!!” Grammy shrilled. Chuck jumped back from the door so quickly, he would have knocked Farley over if Farley hadn’t also leaped at the same time. “Chuck, move!” Farley yelled. While Chuck ran to the couch and pushed it away from the wall, creating a barrier to hide behind, Farley pushed the trolley into the kitchen, well away from the front door. He grabbed two of the canisters from the trolley and ran back to the living room. From what he hoped was a safe position behind the couch, he twisted off the lid from one of the canisters and yelled, “FIRE IN THE HOLE!” Farley whipped the canister at the door. He and Chuck spread themselves flat on the ground behind the couch convinced they were about to die. They could hear Dagny screaming in their ear pieces as the door exploded. The sound was deafening and bits of wood bounced off the walls and ceiling, some of it was aflame. A burning chunk of door landed on Farley’s back. He quickly rolled to his side and it fell off. Chuck used a pillow to brush Farley’s back, ensuring he wasn’t going to catch on fire. The two young men stood up and aimed their weapons at the blown opening, scared of what they might see. Neither of them expected to be fighting with the aliens again so soon after the mountain battle, but they did feel more prepared. At least they had had time to plan the search of Dagny’s house and what they would do if attacked. “Farley! Farley! Are you there?” Dagny’s voice pierced their ear drums. “Dagny! Chuck and I are okay. I have no idea what’s happening here but we blew the door wide open.” The guys moved slowly towards the opening when they heard Josh near the blast-hole call, “CLEAR!” Grammy rushed in poking and prodding Chuck first and then Farley. “You’re both okay? Are you hurt?” Chuck and Farley nodded. “Well, we suspected this wouldn’t be an in and out sort of job.” Grammy looked at Josh, “Report?” “That was Henry Wright. About six months ago, he and his wife and two kids were reported missing, assumed taken by the aliens. They’ve never been found but I guess we know now what happened to them. He was under some sort of spell. Rod Walken often reported that people had seen others being mesmerized and lead onto their ships by aliens. I guess it’s safe to say that maybe some of the others are still alive, although who knows in what state? Henry had obviously been controlled somehow and if he was here, that means the aliens might be onto us.” Josh held his weapon at the ready as his eyes darted back and forth, searching for more unwelcome surprises. “We need to get out of here fast in case they are on their way. There’s no way we can protect all the people out walking around today. Some of them are already watching us, curious about the explosion. Castle is sending some of his people to cordon off the area and he’s alerted Rod Walken to report that the aliens are to blame. Chuck and Farley—did you find anything to indicate where Dagny’s parents are?” “Dagny,” Farley said with sadness in his voice, “I’m sorry, we didn’t find anything. But we will keep looking,” he continued fervently. “Maybe the false report we released about them being found dead will slip up the aliens and lead us to them. Or, maybe those idiots Mike and Gaz will make a mistake and point the way. Wherever they are, they’re with your parents.” They heard Dagny crying softly. Then she said, “I can never go home again, can I?” 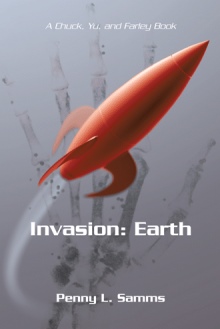 It has been a little over a month since aliens began attacking humans on Earth, forever changing Chuck Holloway’s adolescent life. Now, the aliens are abducting more humans than ever. Chuck, who has recently learned shocking secrets about his Grammy’s past and her connection with the aliens, continues on his terrifying adventure as he and his friend, Farley, flee from Earth to the safety of Yu’s dojo on planet Eris.

As Chuck grieves over the loss of his good friend in the last battle with the aliens, he considers a future with the Planetary Space Agency. He and Farley regroup with the other humans to formulate a plan of retaliation against the aliens. Unfortunately, their plan is thwarted when they realize they have been tracked to Eris. When Chuck and Farley find themselves in unknown territory, they discover that Eris is not the safe haven they once believed. As an unexpected ally surfaces and presents Yu with what could be their only way of fighting the aliens, the humans prepare for the last stand against their enemy. Invasion: Eris is a suspenseful, action-packed story about battles, courage, fear, love, and death, as aliens plot to kill two teenagers and everyone they love.

PENNY L. SAMMS was born in Newfoundland, Canada, and grew up in Toronto, Canada, where she still resides. She worked in the corporate world for 23 years before making the life-changing decision to pursue a career in writing along with other passions. Penny fulfilled her life-long dream of publishing a book in July 2013 with her first novel, Invasion: Earth – A Chuck, Yu, and Farley Book. Invasion: Eris – A Chuck, Yu, and Farley Book is the second in the trilogy. Penny has always loved science fiction, and her favorite nightmares have always been the ones involving aliens invading, albeit they’ve been the most terrifying nightmares for her too.

Being a fan of other genres, Penny has also written books for children, and not wanting to leave the adults out, she was successful in obtaining permission from Wolf Blass Wines in Australia to write a wine-pairing book based on their delicious wines.

Penny looks forward to concluding the last book in the trilogy and presenting it to the world.