Nothing Was Ever Normal 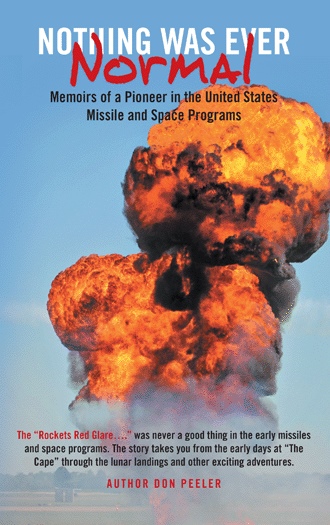 On the pass over Australia where we normally receive the Telemetry information giving us the status of everything on board the vehicle. The report from the Range officer in Australia was "Blokes, I can't seem to hold the signal from the Telemetry--it seems to want to come and go, but it also seems to do it at an almost constant rate. It comes and goes at about the same rate every time. We're about to lose the signal here anyhow, but your systems up at Lockheed Sunnyvale should be picking it up soon enough. Bye for now--I'll re-transmit to you everything we received, but the data isn't that great".

In the heady days of the early 1960s, the United States found itself perched on the edge of technological, sociological, and societal precipices. Advances made by its enemies with offensive ballistic-missile systems put America in catch-up mode, both on Earth and in orbit. Others were leading the race to space, and that was an affront to American safety, status, and national pride.

For the men and women employed as top-secret research workers at the General Motors Division, secrecy was a way of life. The projects they worked on—including Project Jennifer, Big Bird, Thor, Titan missiles, Matador, Regulus, the stealth fighter, and the Fastest Gun in the West—were cloaked in the highest security possible. In their labs, the Lunar Rover, Apollo Guidance, and the complex, multinational F-16 systems were born.

Don Peeler was a typical engineer in this high-stress environment, but his personal experiences were atypical. During his years at the General Motors Division, he experienced events that ran from the humorous to the heroic, and in Nothing Was Ever Normal, he shares his best memories of those days. For Don and his peers, there was no “normal” or any such thing as “standard operating procedures,” because what was occurring had never been experienced before. Compared to NASA’s Manned Space Program, their glory came from knowing that what they were doing was essential to the security of the United States. Now that their classification designations have lapsed, the stories of the “Band of Others” can finally be told.

Don Peeler was one of thousands of bright engineers who helped America dominate space during the Cold War and beyond. He endured sleepless nights fueled by coffee and cigarettes to troubleshoot technical problems and meet launch deadlines, because every project was new and “nothing was normal” meant nothing was typical or predictable. In this book, he looks back on his storied career.

The recollections Peeler fleshes out the most occur later in his career, when he has moved up to management and contract negotiation for his employer, a highly regarded division of General Motors. (The astronauts, as depicted in documentaries and film, drove Corvettes: They were gifts from GM, Peeler notes.) His stories of his greatest negotiating successes demonstrate how the author earned the nickname “Wheeler Dealer Peeler.”

Peeler wrote this memoir to give credit to the men who toiled behind the scenes of the dramatic rocket launches and to tell the younger generation what his peers accomplished. In that, he has succeeded. The book will likely appeal mostly to people who have worked in the industry, but it may also whet readers’ appetites to read up more on the projects covered, or revisit films such as Apollo 13.

The Book is available in hardcover, paperback and eBook.

Review made by “BlueInk,”

For twenty-nine years, author Don Peeler worked with the highly secretive Division of General Motors located in Santa Barbara, California. An air force veteran, he later earned an engineering degree (BSEE) from Purdue University. While at GM, he earned his MBA. He was born in Kokomo, Indiana.