The Paradigm Shift of Elizabeth Ann 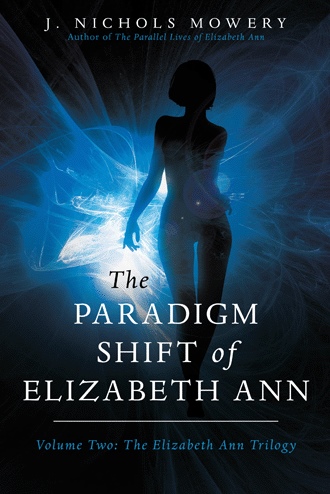 Leaving Lucy at the edge of the outgoing tide, Beth walks back to the end of the point and stops at the edge of a deep pool that reaches under the cliff point. As she wades along its edge, the teal green seawater ripples with each of her steps. Suddenly a small octopus slides out from under a large rock and flees backwards into the shadows under the cliff point. Inspired by the sight, Beth wade in up to her knees, takes a large breath then slips underwater to peer into the lush sea garden of anemones and starfish under the cliff. Swimming down, she sees the octopus inside an old green bottle has changed skin color to match that of the shadowed undercut. Surfacing, she scares schools of tiny fish which flash away to the deepest shadows only to be caught by the sea life living down there.

As she works her way around the immense tide pool, Beth angles towards the wide sandbar flowing out from the sloping shoreline. Letting the sun and breeze dry her clothes, she notices when the wind dies completely and sees a perfect reflection of the cliff tops are laid on the surface, showing the bluest of skies in the background. The beautiful scene puts her in such a tranquil mood, that when a hard gust of wind erases the reflection, she is startled and turns to look back past the cliff point.

It’s then that she realizes there is a silence that is not normal. It’s too total and Beth it struck by a strong urgency to hurry towards shore. Walking briskly across the sandbar connected to the shoreline, she is almost running when the ground gives a strange shift of movement and the sloping sandbar suddenly drops below a high bank of rocks and boulders. Looking at the cliff point, she sees high rolling waves are crashing against several tall sea stacks where the cliff point used to be.

“Sea stacks, what the hell…? This beach doesn’t have sea stacks. There’s only one cliff point at each end of Redcliff’s beach. In my dimension... damn, the dimension must have changed. This isn’t my beach. Not anymore. And the tide’s coming in fast.”

Scrambling across tide flats now covered with rocks and boulders, Beth tries to reach the giant boulders along the high cut of the shoreline. However within those few seconds, the beach sinks and the first high rolling wave hits, knocking her off her feet. Struggling against the push of the fast water, Beth’s legs and knees scrape against barnacle covered boulders and float logs as she tries to push towards shore. Soon she is caught in the powerful backflow of the waves and is pulled away from shore.

Swimming with the surge, Beth tries her best to stay close to shore, but each time she is pushed and pulled past boulders covered with barnacles and gobs of muscles which cut and scrape her arms and legs. When she is finally able to grab onto a smooth boulder sticking out of the water, she holds herself there and is able to rest a few minutes. However, a massive wave sweeps around the sea stacks, crashes over her and sucks her under water for nearly a minute. Kicking her way back to the surface, she is pulled back across sharp edged mussels clinging to unseen boulders.

Crying out as the sea life slashes her hands and legs, Beth kicks away and tries to swim with the force of the wave. As soon as she is swept towards shore and nearly reaches safety, the wave catches her in the retreating back flow pulling her past where she’d been. Floundering in the fast flowing water, Beth feels tentacles wrap her legs and realizes she is caught in a bed of whipping kelp. Now exhausted, she lays back upon the swaying whips of the seaweed and lets the kelp forest hold her against the push/pull of each wave. It takes another high rolling wave to pull her free from the kelp forest’s hold and Beth lets herself be pulled towards shore. Too exhausted to struggle, she turns onto her back and lets the force of the ocean pull her to and fro on each swell. Slowly, the waves bring her closer to the high cut of shoreline where a row of sun-bleached drift logs rest beside several large boulders.

This when a huge half-submerged float log, riding within a rushing wave, broadsides Beth and knocks her unconscious. As the giant log pushes against her, a snag grabs hold of Beth’s tee-shirt and secures her firmly to its surface. When the old floater nears shore, it slowly rolls within the wave, turning upside down, and pulls Beth under the water for the time it takes the wave to leave the log on shore. The wave reaches its peak flow above the shoreline and the log rolls once more, bringing Beth’s limp body to the surface with her T-shirt held tight by the snag. In the next few seconds, the wave settles the old floater between immense boulders on the steep shoreline and the impact of the landing wakens Beth.

Finding herself dangling over a pile of sun bleached logs, Beth realizes she is on dry solid ground and she struggles to sit up and feels something holding onto her. Jerking this way and that, she finally frees her tee-shirt and slides off the side of the log with a hard bounce on the logs below. Springing to her feet, Beth, powered by a rush of adrenaline, ignores her injuries and scrambles through the boulders to a zig-zagging path along a rocky slope.

Following this path up to where an old stump stands rooted at the edge of a smooth section of granite, Beth stops and leans against the stumps smooth silver surface. Feeling warmth from the sun-heated wood, she slowly sits down on the smooth granite and tares at the waves crashing over the boulders where the float log was laid. Seeing how close she came to death, Beth shivers and hunkers into the folds of the stump’s thick twisted roots.

It’s then that she sees the slashes across her legs, arms and hands and gently tries to brush sand from the tender wounds. Her efforts reopen the wounds and cause them to bleed. Pulling off the torn tee-shirt, she dabs at the bloody gashes until the blood flow stops. Feeling the warmth of the sun upon her bare skin, Beth strips off the rest of her clothing and spreads it over the rocks around her. The bloody tee-shirt is flipped over the nearest twisted root. Naked, but much warmer, Beth lays back against the sun-heated granite surface of the cliff and the warmth soothes her bruised body. Within minutes, she is sound asleep.

The sun is high in the sky when a pair of terns scream down at her from the top of the old stump and waken Beth. At first she is confused as to where she is and why she is totally naked. Then, seeing her clothes spread out around her, she remembers and finds each piece warm and dry as she dresses.

Checking the wounds on her legs and arms, she decides not to touch the dried slashes and looks up at the sky. “I’d guess, by the angle of the sun, it must be nearly noon. By the looks of the burn on my arms, I must have slept over an hour. I’d better find my way back home and get some aloe on them.”

Standing, she startles the terns off their next at the top of the stump and as she watches the pair flap away, she sees the old giant log, which brought her to shore, is bobbing at the edge of the highest tide she’s ever seen. Frowning at where the log is floating, Beth realizes if it had not rolled her back the surface before it settled between those boulders, she would have been crushed or drowned.

“But I wasn’t.” Beth tells herself and gives the old thing a salute and says, “Thanks for the ride old friend. You did all the right things. Many thanks for saving my life.” 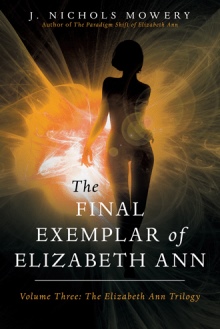 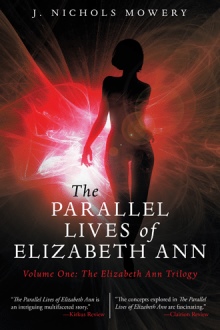 Three women look alike. They were each born with the same name. Yet, somehow, during childhood, they broke apart and became three separate women, existing in different dimensions. This first of June marks the second year that the three parallel lives of Elizabeth Ann come together to meet at the adjoined tables over the golden stone.

At this particular juncture, Liz Day, Beth Anderson, and Eliza Staples come together to relate the adventures that have occurred since their last meeting. Liz tells of finding Kip at the north cliffs, Beth announces the arrival of Dr. Lucy Wong, and Eliza shares a terrible tragedy, each with their eye to the summer solstice, when the universe aligns—as do parallel lives.

In the weeks that follow, the women are both thrilled and dumbfounded by new dimensions they discover as well as, shockingly, new versions of themselves. On the day of the much-anticipated summer solstice, the women say goodbye to one of their own and wonder what to expect in the coming year, whether it holds refreshing, new realizations or unknown disaster.

J. Nichols Mowery is a two dimensional artist and writer of several articles and stories. She and her husband, John, raised two children on an organic farm in eastern Washington, where she was an active artist and where she also began her writing career. Currently, she lives south of Seattle.