Oracles of an Ethiopian Coffeehouse 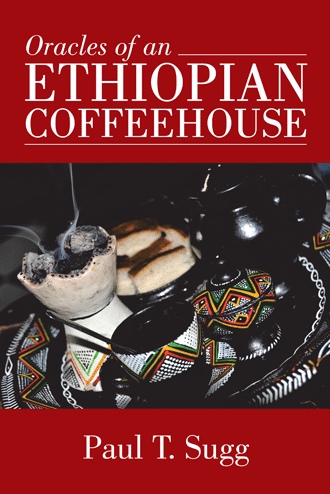 Befikuda approached the row house. Flaking white paint gave way to spot jobs, dabs of paint, or mere whitewash to provide some resemblance of maintenance. A band of red paint covered the base of the building about a meter high to cover up scuff marks and other signs of abuse, such as splattered mud from the streets and other debris kicked up by passersby. A poster or two left over from Mengistu’s Marxist regime still remained, his once blazing image now faded away as if to disintegrate with time along with the rest of the worn handbills. Bits and pieces flaked off, more than fading from existence but being blown into the dust bins of irrelevant history, like Mengistu.

He walked in, greeting his two friends, and then sat down, pondering over the prospects running through his mind. “You’ve got that look on your face. We should talk about this as Tsegaye and I too have had some prophetic inclinations, nuances, or something. But first let us pray, giving our day up to God and asking for spiritual discernment and guidance on these matters,” said Addesu.

The other two agreed and joined hands in prayer, blessing the nourishment they were about to take and those preparing it, as well as petitioning God for a renewed, fresh anointing of grace and clarity regarding the matters at hand.

As they began to imbibe in their morning coffee and cakes, Befikuda said, “I have had some sort of prophetic instinct or inclination brewing up from my spirit trying to tell me something, not necessarily a foreboding warning or anything but perhaps something more important. I have that same restlessness that I have had before, indeed that we have all had prior to something like this. It’s a feeling of uneasiness …”

“But not necessarily your own,” broke in Tsegaye.

“It’s as if you feel the discomfort, uneasiness, or pain of pilgrims of some sort headed our way,” said Addesu.

“I felt the same way when I woke up this morning, as did Tsegaye. We already discussed this, but of course we wanted to wait for you to see what you thought, if again you shared these same thoughts and feelings simultaneously with us, as we have all been prophetically linked. We wanted to see if you concurred with us on these matters. Now that all three of us have concurred on this, I believe was have confirmation. Someone or something is headed our way,” said Addesu.

“Some would automatically jump to the conclusion that it may be the biblically prophesied rapture, but this isn’t it. The signs are not there for that. Secondly, too many get caught up in end-time prophesy that they seem to miss the importance or flat-out ignore other ‘prophetic nuances’ and indeed their real ministry of ‘walking the walk for the talk of the talk.’ They often use this as an excuse not to actively engage in the important work God has actually assigned them to do,” commented Tsegaye.

“I agree,” responded Befikuda. “This is one area of practically applied theology where we have all been on the same page regardless of denominational differences. In fact, many are so wrought up in that and other religious points as opposed to the calling of a faith-based relationship in Christ that they seem to intentionally ignore God’s real calling for them in the first place and use such debates as an excuse to deafen their ears as a sort of spiritual anesthesia.” “With some, heavy anesthesia isn’t even necessary. Mere Novocain would seem to do it,” quipped Addesu.

All three laughed as they drank coffee and discussed the event they knew would come. Whatever it was to be, the three oracles of an Ethiopian coffeehouse would be well prepared as always. They awaited it with great anticipation.

Long considered a place of mystery, the quaint ancient town of Axum, Ethiopia, is a mystical and fascinating place, rumored to house the legendary lost Ark of the Covenant. As two young men travel there on separate pilgrimages, neither has any idea that they will soon find much more than they ever imagined.

As his plane lands in Axum, Garret Holcomb cannot help but wonder if he is on a true pilgrimage in search of the lost Covenant or to escape from the emptiness of emotional bankruptcy. His seatmate, Jamaal Abdul Meriweather, wants to be the next Spike Lee and is heading to Axum, where he hopes to film a documentary about the Covenant. After the two realize they have much in common, they pair up to help each other with their missions. But when they eventually meet up with three oracles of an Ethiopian coffeehouse, the holy men soon help them look inward to reflect about life’s most burning issues as well as the personal challenges each has been afraid to face, ultimately revealing a stunning reality for both.

In this poignant tale, two young men forced out of their conventional paradigms bravely confront their truths, with help from three oracles of an Ethiopian coffeehouse.

Paul Sugg earned a bachelor’s degree in political science from the University of Iowa and a master of science degree in international development/development economics from Iowa State University. He has worked in several countries and is currently president of AppTech Development International in West Des Moines, Iowa, where he resides with his wife, Saule.