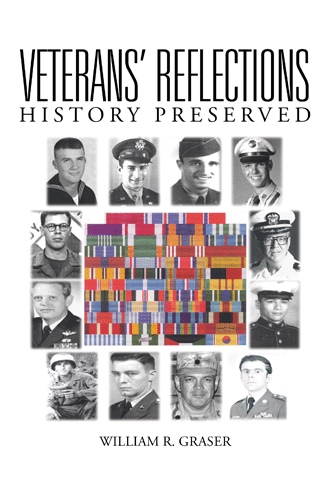 Each night as we traversed the roads of Vietnam, a few shots rang out, and some were aimed at us. The only lights were from our headlights, which didn’t help any. All one needed to do was aim a few feet up and a few feet in back of the lights, and there was a tractor-trailer truck, fuel truck, or some other vehicle. When shots were fired, we could usually see the muzzle flash and returned fire. Luckily for us, Charlie [the Viet Cong] and his band of merry men were not very good shots in the dark and at moving targets.

When my mission was completed, my team made it back safely, although each night we could count several bullet holes in our loads and occasionally in the truck. Throughout the war, not every driver and security person was so lucky.

Pacific Book Review Star Awarded to Books of Excellent Merit Some of the best history is personal—that which is collected from participants in great events and movements. In William R. Graser’s book, Veterans’ Reflections: History Preserved, we are offered stories and vignettes from those who serve in the United States military, in their own words. Sergeant First Class William R. Graser, USA (Ret) worked for the US Army Security Agency overseas and in America. In 2007, Graser conceived the simple but ingenious idea of letting soldiers tell their own stories and through this framework, offer a picture of sixty-three years of American military history. His sixty interviews comprise the experiences of military personnel from World War II beginning in 1941, through the Cold War, the Korean War, the Vietnam War, and what the author refers to as the Quiet War Korea (aka Korean DMZ Conflict). The last stories come from Global and Homeland Service, up to 2004. Each segment starts with an explanation of the conflict, its background and causes, followed by interviewee accounts. The first such account comes from Clement Hutchins, age 93 in 2011, who served in World War II with the Merchant Marines. In the North Atlantic, prey to attacks from the German “Wolf Pack” submarines, Hutchins recalls “one evening in particular when nine merchant ships were sunk in less than fifteen minutes.” Samuel Masessa was an infantryman in Korea, where, he states, “the cold became the enemy.” He recounts a battle between American tanks and Chinese troops in a sudden attack that left many enemy soldiers dead; he and his comrades then used flamethrowers to destroy the bodies in a grim task “to prevent disease and eliminate the smell.” Harry Dalton was a K9 dog handler in Vietnam who was awarded numerous medals but stated “I was proud to serve but prefer to keep most of my experiences to myself.” Another soldier, Richard Matthews who served in the US Air Force in the sky over Cambodia and Laos, expresses a similar sentiment: “I don’t make a lot of noise about my awards and decorations. In reality we were just soldiers, airmen, marines, sailors and guardians doing what we were trained to do and dedicated to doing.” By allowing veterans to express their sentiments and describe their very real and harrowing experiences, Graser has done honor to these individuals who served us so bravely and unselfishly. He offers an intelligent analysis of the stages of war and conflict that the US was engaged in during the book’s time-frame. He includes useful appendices of military terms, acronyms, and pictures of military medals. Graser wrote Veterans’ Reflections: History Preserved to increase our general understanding of American warfare through the eyes of those who were there. He concludes with a phrase that will be familiar to anyone who has a veteran in the family: “When you see a veteran, say thank you!” This book is a remarkable tribute to the sacrifice made by our veterans who fought for our country. Veterans’ Reflections is compelling and inspiring to say the least. Our heroes deserve to be heard. Highly Recommended The military service of millions of Americans is reflected in these stories. They will put you in the middle of the action of our nation’s wars. Through firsthand accounts of veterans who served during World War II, the Cold War, Korean War, Cuban Missile Crisis, Vietnam War, Korean DMZ Conflict also known as the Quiet War, and Operations Desert Storm and Enduring Freedom (Afghanistan); you’ll find yourself paying tribute to each and every veteran. The stories of personal sacrifice, commitment, and valor demonstrate the values that have made the United States of America the envy of the world. Sixty veterans recall their time in uniform, sharing stories that are tragic, heart wrenching and sometimes funny. These stories provide an excellent opportunity to gain an understanding and appreciation of veterans. Celebrate what is means to be an American devoted to freedom with Veterans’ Reflections. As a veteran himself, the author is obviously very close to this work, and it shows not only in his passion for his subject, but also in his attention to detail. His method, which weaves the veterans’ own stories into an historical overview of a specific conflict, is extremely effective. The soldiers’ accounts go well beyond the war’s scorecard and reveal some of the actual fears and experiences of the participants. Anyone can tell the facts behind a story, but those who have lived it can share insights no secondhand history can match. — The US Review of Books

William R. Graser was a Sergeant First Class recruited by the US Army Security Agency in 1965. His assignments included Korea, Vietnam, Thailand, West Germany, occupied West Berlin—and the US Army Security Agency’s headquarters at Arlington Hall Station, Arlington, Virginia. He earned the Army of Occupation Medal and was awarded the Legion of Merit Medal for his exceptionally meritorious conduct in the performance of outstanding services and achievements while serving with the US Army Field Station Berlin. Graser wrote Veterans’ Reflections: History Preserved to increase our general understanding of American warfare through the eyes of those who were there. He concludes with a phrase that will be familiar to anyone who has a veteran in the family: “When you see a veteran, say thank you!” This book is a remarkable tribute to the sacrifice made by our veterans who fought for our country. Veterans’ Reflections is compelling and inspiring to say the least. Our heroes deserve to be heard. Highly recommended! Order copy direct from the Amazon Author’s Page: https://www.amazon.com/-/e/B06Y5S83Y1