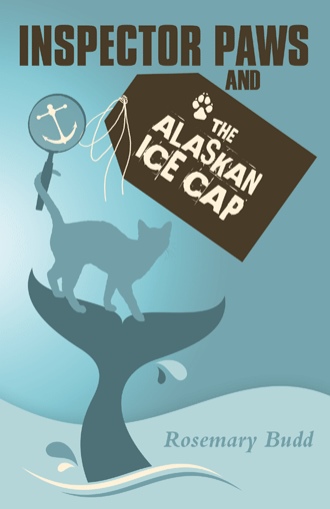 “A cat!”
The woman’s shriek sent me scurrying for cover. I’d run into her sort before in my old alley-cat days. She was the kind who threw a bucket over your head if you so much as sniffed at her garden and then called the animal control people to put you out of your misery.

I scooted under the nearest deckchair, slithered beneath an abandoned straw sunhat, and peered out at the woman.

If this cruise ship was called The Spirit of the North, then the woman dressed totally in black — black sandals, black cropped pants, black tee shirt with absolutely no bling, black sun glasses, and black sun visor — must be the siren of doom assigned to toss unsuspecting souls overboard as fodder for Davey Jones’ locker. Her only splash of color — a bright red slash across her face where her lips pressed firmly together — did nothing to ease my trembling whiskers. She shifted tote bags, cushions, and deckchairs, obviously hunting for me. I held my breath and checked to make sure my tail was firmly tucked under the hat. That appendage had a bad habit of giving away my whereabouts.

Her black sandals slipped under my deckchair. She lifted a tote bag off the chair, put it back down, shuffled a newspaper. The toe of her sandal bumped into the sunhat. My body tensed, ready to flee. Her sandal quickly withdrew as a man approached.

The man was dressed totally in white, from his white loafers to the thick wavy locks of hair that peeked out from under his white cap. He had the firm square jaw of a man used to giving orders. Must be one of the crew members. A whole pack of similar white uniforms had chased after me as I raced up nine flights of stairs and dashed around nine huge decks in my search for Stella and Max.

Stella called herself my caretaker, but great balls of fur, she was the one that needed to be taken care of. She’d come on this ship knowing full well she was headed for danger. And if that wasn’t bad enough, she’d dragged her granddaughter, Max, along with her. I needed to find them and get them off this ship before it sailed, but how was I going to do that tucked under this straw bonnet?

“What kind of ship are you running, Gideon?” the lady demanded. She seemed to have almost as much derision for the man as she did for me. “I just saw a cat.”

The man ignored her comment.
“Bon Voyage, Sis,” he said. The smile that slid across his face with the ease of a well-worn sweater, softening the firmness of his jaw and crinkling the weathered skin around his eyes, proved he was a man used to dealing with difficult people. He handed the siren of doom a tall yellow glass topped with a slice of orange and a tiny pink umbrella. “Here’s your complimentary drink, Sis! Raise your glass to a delightful cruise.”

Free drinks? I breathed a sigh of relief and relaxed under my sunhat. If they were handing out free drinks — especially fancy drinks with pink umbrellas — Stella would be here sooner or later. I hoped it was sooner.

“I tell you, Gideon, I saw a cat,” the woman said. She pulled a sani-wipe from her handbag, wiped off the rim of her glass, and held her drink at arm’s length.

Was she afraid the color might contaminate her black outfit? And I thought Stella and her zany friend Jo were weird. Humans! They’re beyond comprehension.

“Nonsense!” The man took a sip of his drink. “What would a cat be doing aboard a cruise ship?”

“That’s what I want to know,” the lady demanded. “This is your ship, Gideon. I hope you’re still striving for excellence, not slacking off, letting the crew get away with who knows what.” The man’s comfortable smile slipped a little, and his jaw tightened. “Let’s get one thing straight, Miriam,” he said. “I’m not your little brother now in need of mothering and advice. I’m a grown man, captain of this ship.”

Captain? A tremor of fear set my whiskers tingling again. If he was the captain, what was he doing here downing drinks and chit-chatting with passengers? Shouldn’t he be in the wheel house or wherever it is they steer the ship from?

“If you want to do some mothering, Miriam,” the captain continued, “you can keep an eye on Alvin for me.”

Miriam heaved a sigh that set the paper umbrella on her drink flapping.

“As to Alvin,” she started, but whatever she was going to say about Alvin remained unsaid. Her eyes widened. She grabbed the captain’s arm and waved her drink in the direction of the doorway.

I poked my head out from under the hat. Leroy Garvey? The man Stella’s friend Jo was about to marry? The one who’d threatened Stella? Stella had called Jo this morning, but Leroy Garvey took the call and refused to let her talk to Jo. “I don’t want to see you on that cruise,” he’d said. I could hear the threat in his voice even from my perch on Stella’s lap. “Accidents can happen at sea, you know,” he said.

I slid further out from under the hat for a better look. He was shorter than I’d expected. The top of his head only reached as high as Jo’s shoulder. He wore a white suit to rival the captain’s, but his paunch had popped open the buttons at the bottom. The navy blue scarf tucked into the open neck of his jacket reflected the steely blue of his eyes, a blue as dark and cold as the churning waves behind him. He smiled up at Jo. Jo, dressed in a matching sailor suit, smiled back at him.

Great furry hairballs! Where was Stella? I needed to find her and get her off this ship before she ran into Leroy Garvey. I jumped onto the railing and scanned the deck.

“Why didn’t you tell me Leroy Garvey would be on this cruise?” Miriam snapped.

The captain ignored her question, but his strong sinewy hand slid under my midsection and lifted me high above the railing. I tried to yowl for help, but the cry froze in my throat. I gazed in terror as the steely blue waves below me slurped and slapped at the sides of the boat. If there’s anything I hate, it’s falling. You can forget that flea-brained theory that cats always land on their feet. I know from experience it’s not true. Just the thought of falling into that sea full of churning waves turned me into a shuddering ball of fear.

“Would you look at this, Miriam,” the captain said, his smile widening until his whole face was crinkled with laughter lines. “I’ve caught our little stowaway. A stowaway cat. Now that’s a first.”

His eyes, the same blue as the slurping, slapping waves, sparkled with devilish glee as he stared into my terrified ones.

“Now where did you come from?” he asked.

“Never mind the cat.” Miriam plopped her drink on the arm of a deck chair and reached for a black sweater slung over the back. “Help me get off this ship. I’m not sailing with Leroy Garvey.”

The captain frowned. “For goodness sakes, Miriam,” he said. “That was ages ago. I thought you’d be over it by now. Anyway, it’s a big ship.”

“No ship is big enough to share with that man,” Miriam snapped. “I’m getting off.”

A blast louder than any fog horn I’d ever heard rent the air. I’d have jumped overboard, waves or no waves, if the captain’s hand hadn’t tightened around me. He drew me close to his chest. I tried to resist, but the ship’s horn gave another blast every bit as loud as the last one. I burrowed my head into his shoulder trying to block out the noise.

“Too late to get off now,” the captain said when the sound of the whistle died away. “This boat’s underway.”

Underway? I could feel the motion even as the captain said it. The ship indeed was moving. But this was the captain’s shoulder my head was burrowed into. So who was driving this thing?

I lifted my head and yowled in terror. 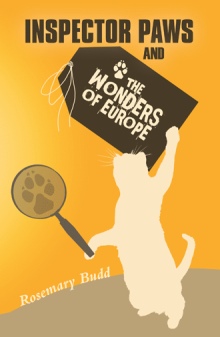 Inspector Paws and the Wonders of Europe
Rosemary Budd
$14.95

Inspector Paws, a battle-scarred alley cat, is dismayed when his caretaker, Stella Clayton, decides to take a cruise despite threats from her best friend’s soon-to-be husband. Jo plans to marry the despicable Leroy Garvey onboard, but Leroy makes it clear he wants Stella nowhere near. After all, as he tells her, “Accidents can happen at sea.”

In an effort to protect Stella, Paws sneaks onboard The Spirit of the North, bound for Alaska. Before he can find her, the ship sets sail, and Paws is now a feline stowaway! Soon, he’s caught and tossed into Captain Bonar’s brig with little hope of protecting his owner and her equally headstrong granddaughter, Max.

He’s lucky to escape just as a murder ensues in the ship’s Neptune’s Loft. Stella and Max are all too happy to stick their noses into the investigation, but haven’t they heard curiosity killed the cat? It’s up to Paws to find the guilty party, while keeping his humans safe aboard a mad ship where anything can happen.