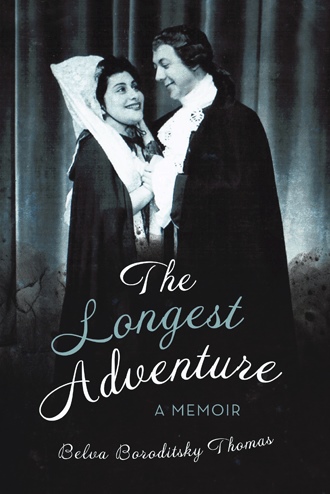 It was November fifth, 1954, Guy Fawkes night, a Saturday night on which no performance was scheduled; a great night for people to celebrate the failure of Guy Fawkes to blow up the Houses of Parliament in 1605. We were in the Welsh seaside town of Porthcawl, and Watty, my fellow soprano, and I were at loose ends. We saw a notice in the lobby of the hotel informing us that a dance would be held in the community Pavilion. “Let’s go!” we said to each other, donned our best apparel, fortified ourselves with a sherry from the hotel bar and went off to rejoice with the locals. I was dressed in a Mrs. Gutkin special, a V-necked black number that made me feel very elegant. Watty tried to look slinky in a Marks and Spencer party dress for mature women, but didn’t quite succeed. When we stepped into the dance hall we realized that the local girls were all wearing their summer cotton frocks because, more than likely, these were the only party dresses they had, and we were sticking out like sore thumbs. Nevertheless, a couple of brave fellows found the courage to ask us to dance. I was fox-trotting with a very handsome, blond, blue-eyed young man called Arwel Hughes. He was wearing a starchy white collar connected to a striped shirt which could be laundered separately - the fashion of the day. Not a bad dancer, I thought. But when I found he was an engine driver who had voted Conservative in the last election, I immediately lost interest. He should have voted Labor.


After moving around the floor with a few other young men, I was confronted by a fellow who asked me to dance. He had a very large Jewish nose, which somehow seemed inappropriate in this part of the world. Out of curiosity I nodded with a smile, and he awkwardly took one hand, unsure of how to hold the other. He apologized shyly that he didn’t quite know how to dance, so I suggested we walk together in rhythm. As we stood there swaying to the music, I discovered that he had not only voted Labor in the last election, but was studying philosophy at a university. Now this was more interesting! So, as I walked backwards and he walked forwards, we got to learn a little more about each other. Family, friends, movie interests, books, his study and my music - we didn't need to continue dancing as there was so much to talk about - it was a pleasure to meet a kindred spirit.


As my good friend Watty was being well taken care of by a tenor from a local choir, I agreed to have David Evan Thomas walk me back to the hotel with the promise that we meet again the next afternoon after he had attended chapel with his mother. I sensed something very special about this quiet young man whose ready sense of humor prompted him to reply, “Well, I'm Welsh!” after I had informed him that “I'm Jewish!” A most unusual beginning to a friendship. The next day we got down to the business of getting to know each other far better. As he’d never met a Jew before, I brought him up to date on the many issues stemming from anti-Semitism, and I gained insights into the domination of Welsh life by the English. We discovered in each other a deep love for the music and the culture that surrounded us. He told me that he had been inebriated while attending the wedding of a friend yesterday, and consequently was not very clearheaded at the Pavilion last night, but was now quite free of the influence. At the end of the afternoon, saying that he would like to keep in touch, I gave him my address so that he could write to me.


With this Welshman occupying a fresh corner of interest in my mind, I returned to the operatic challenges at hand. Three performances in the next week and we were then heading for Aberdovey from Porthcawl. On the way, we passed through the seaside town of Aberystwyth, the place where my new friend was attending the University of Wales. When we arrived at our destination, I realized that the two towns, Aberystwyth and Aberdovey, were by Canadian standards very close to each other. “Oh,” said the very serious clerk at the front desk of the Aberdovey Hotel, “we are thirty-five long miles away and there are very few buses running.” I wasn't going to let such a small complication deter me. I had to be in touch with my new friend and tell him how close I was and that I had two days free from work. But how to get in touch with him? I had no address or telephone number, but I did recall his mentioning a lighthouse at the end of his street.


I immediately went to work. I called the local telephone company and told them I was trying to find a friend living in Aberystwyth “On the street with the lighthouse at the end of it.” Luckily, the operator was not very busy that day, and was ready for a little excitement when she learned that it was a Canadian making the request, not an American as my accent might have suggested. Our country was greatly admired for the way it had rallied to support and join the British in their terrible struggle against the Nazis. On the other hand, the Americans were disliked in Great Britain at that time because they appeared to be too full of themselves and had come late to the war.


The operator set to work calling first the lighthouse keeper, then each house along that road until she found the David Evan Thomas who was able to recognize the name of Belva Boroditsky from Canada. Considering the brevity of our friendship so far, I was surprised at the joy I felt in hearing his voice and his eager response to my invitation to join me on Sunday. I had no idea what difficulties he had finding transportation to Aberdovey, but there he was in the early morning, cheerful and ready for our adventure. With a picnic lunch in a duffel bag packed by the hotel’s chef, we set off to climb the mountain behind the town and share an utterly glorious experience! The slopes of the mountain were covered with the greenest growth I'd ever seen, and the panorama of the valley below and the sea beyond that, were for a Prairie girl, absolutely breath-taking! At the very top of the hill, we found a shepherd’s hut, hundreds of years old, with walls of loose stone and two small windows overlooking the huge field in which sheep would graze. The door was easy to open. We were tired after the climb, and hungry as a result of an early breakfast. We sat at a very old table on very rickety chairs and ate our simple lunch while I introduced David to my Aunties Peshkeh, Masheh and Frumeh and their numerous offspring, and he took the time to describe his Aunties Olwydd, Babs, Edith, Annie and Winnie and his many cousins. We explored the different educational paths we had followed - I with the Jewish emphasis on culture and social awareness, and he in the Protestant tradition of love for the Bible and one’s fellow man. He spoke about Sunday evenings spent in the chapel with his mother and other congregants listening to weekly portions of the Scriptures, and I was humbled by his deep connection with the stories and the teachings of my ancestors. By comparison, my appreciation of Biblical writings was very primitive. I marveled that the two of us, from worlds as far apart as Winnipeg and Wales, were drawn together in the most unlikely way and felt closer to each other than we ever had with anyone else. As we came to know the delightful names and characters in our families and were warmed by the comfort of a spiritual blending, without knowing it, we were already growing to love one another. Years after this, David told me that he was certain that day that he was going to marry me.

In The Longest Adventure, Thomas shares her life adventure, beginning with her birth in 1929.

Growing up in a warm, self-reliant, Yiddish-speaking community in Winnipeg, Canada. She became aware early on of the world her parents came from and the wider world around her she could move into if she tried. Leaving both a religious and richly cultural community for an operatic career with the Arts Council Opera Group and the Glyndebourne Opera Festival in Great Britain, she discovered the richness to be found in the music of the great composers and became a promoter of this art form for the rest of her working years.

Marriage to a Welsh teacher of English and a seeker of his own spiritual path in Subud and motherhood with five gifted children was followed by entrepreneurial social work in the creation and development of a community cultural organization, the Preville Fine Arts Centre. She served as chairwoman of the regional school commission that introduced the French immersion program to Canada.

This memoir narrates the adventurous story of one woman who took a leap from one world to another, a plunge from one career to another, and a step from religion to humanism.

Belva Boroditsky Thomas was born to Russian Jewish immigrants and was educated in Winnipeg. She married a Welsh teacher of English and a seeker of his own spiritual path, raised five children, created a fine arts centre in Montreal’s suburbia, and was elected chairwoman of a regional school board.