Making the Most of Disputes in Life and Work 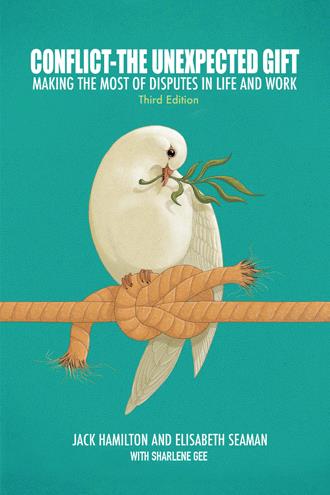 “Even the best of friends face conflicts, but that needn’t mean the end of the relationship.”—Anonymous

At some point in your life, you have been entangled in a conflict with another person, whether it was a small disagreement with a store clerk or a full-scale battle with a family member. You may even have managed to find yourself in a conflict—perhaps small and petty but nevertheless a conflict—in the past 24 hours.

Conflict is a natural dimension of human interactions. The rough edges of people’s personalities can irritate and put off others.  When that happens, it leads to clashes among people who live or work together, which often leaves personal relationships damaged. .

These stand-offs don’t need to create a lifetime of hurt and anger.

All told, the four of us have mediated hundreds of cases involving conflicts between adolescent children and parents; adult children and aging parents; husbands and wives; landlords and tenants; employees and managers; co-workers in commercial businesses and nonprofits; neighbors; faculty members in schools and colleges; and associates and colleagues of all kinds. Mediation is an extremely rewarding process because we have seen tangible results of people arriving at agreements of their own making.

The capacity to learn how to resolve interpersonal conflicts is deeply rooted in our human potential. It may be one of the most valuable skill sets we can develop in the course of our lives.

Although our clients have often sat down at the mediation table “breathing fire” at each other, in more than 90 percent of the cases we have mediated, they have resolved their issues and ended up hugging each other—or at least shaking hands.

Even so, we developed a gnawing concern that we hadn’t been as helpful to our clients as we might have been. We always wished them well, but as they left the mediation room with copies of signed agreements, we privately questioned whether they had learned all the skills they needed to handle future conflicts on their own.

We decided to do something about that!

We developed a curriculum based on the structured communication principles that are the foundation of the mediation process. We then used the curriculum to teach conflict-resolution skills to a broad spectrum of classroom students and workshop participants. They have ranged from middle-school children to public and private school teachers and college professors; from city council members to boards of directors. Our client list has included employees and volunteers in public and private organizations of all kinds.

Our curriculum became the basis of this book. The Learn2Resolve method for resolving interpersonal conflicts emphasizes the need for individuals to develop certain skills:  understanding how our minds work, practicing self-awareness, listening for understanding, identifying our own assumptions and those we make about others, clarifying and validating these assumptions with one another and ultimately reaching agreement on a fresh path forward.

This works well in a structured setting, but in daily life, it’s not as easy. People seldom reflect on their thoughts and feelings about the people they’re butting heads with. They rarely open themselves up to receive the thoughts and feelings of the people they’re fighting with. And rarely do they engage in a dialogue that allows the feuding parties to discuss their assumptions about each other and work together to determine which are valid and which aren’t.

This is the domain of Conflict—The Unexpected Gift:  Making the most of disputes in life and work.  We are presenting it as a handbook you can use to acquire the skills to span impasses and repair broken relationships. In it, we explain why conflicts at first seem so intractable; why people often falter when trying to resolve their issues; and why people sometimes avoid conflicts altogether.

This book is intended to help people of all ages develop conflict resolution skills. Each chapter offers concrete steps for learning a new way to communicate that helps us resolve conflicts and build more viable relationships with family members, friends, acquaintances and other people with whom we interact. The real-life vignettes included in each chapter show how others have handled conflict.

How to use this book

It can be challenging to take the steps necessary to resolve conflicts. Personal relationships are complicated. Empathy, for example, is a skill that we believe is a necessary building block to help resolve conflicts. Yet, it is a struggle to step away from a conditioned way of looking at things from only your own perspective. You might not really believe you can step into someone else’s shoes.

In this book, we’ll show you how you can. Here you’ll find exercises you can use to  enhance your empathy skills. Our own professional experiences indicate that the methods we describe are effective. We’ve seen them change people’s lives.

This book was designed for you to be able to read the chapters in any order, so you can quickly access information pertinent to your particular situation. However, we strongly suggest that you start by reading Chapter 1, “The Ladder of Assumptions,” because the Ladder plays a central role in the book.

This book will help you recognize that the behavior of others has very little to do with you. A person’s behavior toward you may be caused by a number of factors, including many that the person isn’t even aware of. A person’s behavior is often the result of things happening in that person’s life at that time. Other contributing factors are heredity, early life conditioning, cultural factors, traumatic experiences and even inadequate basic needs. (How receptive are you to resolving a problem when you’ve been up all night?)

Something you did or said may have been a trigger for another person’s reactions, but you neither caused that person’s behavior nor were responsible for it. Her actions may be directed toward you because you happen to be the closest or easiest person for her to unleash her pent-up emotions on. Maybe your mere presence and proximity was enough to prompt her action. It didn’t have to be directed at you; you just happen to have been there to receive it.

The book is replete with anecdotes and cases from our work with various clients, students and workshop participants, as well as from our own lives. To ensure confidentiality, we have changed all identifying facts.

It is our firm conviction that a set of practices designed and intended to help people become more skillful at resolving conflicts is one way we can nudge the world—one strengthened relationship at a time--toward solving the growing number of problems that result from breakdowns in interpersonal relationships.

When people learn to communicate in this way, there will eventually be fewer misunderstandings, less violence and decreased outbreaks of war.

Conflict is an unexpected gift—an opportunity for change. A pearl starts as an irritation in an oyster. Similarly, a conflict can lead to a new awareness and a new openness in your relationships. Resolving interpersonal conflicts is a process. In the course of deconstructing your conflict you learn to let go of unfounded assumptions and pave new chapters in your relationships. A conflict, when reconciled, can be the gift of a second chance.

Conflict—The Unexpected Gift Conflict between people can be defined as a difference that causes disagreements. Authors Jack Hamilton and Elisabeth Seaman go to the root of what causes conflict and how to rebuild relationships. Interpersonal conflicts permeate our lives. Sometimes we believe that another person treated us unfairly, and that assumption causes us to become angry at the person. Such conflicts in relationships often are intensified because of old patterns of thinking and behavior that have gotten out of hand. Becoming aware of someone’s true intentions, and the many factors that caused them to behave the way they did, as well as awareness of our own reactions, starts us on the path to mutual understanding and reconciliation. Conflict—The Unexpected Gift: Making the Most of Disputes in Life and Work suggests practical ways to honestly address, talk through and benefit from resolving conflicts. Every chapter has real-life accounts of people’s unresolved issues and the creative ways they resolved them. The book stresses the importance of knowing yourself, clarifying and letting go of unfounded assumptions, apologizing to heal old hurts and moving forward by not only repairing relationships, but also often improving them. Hamilton and Seaman wrote this book to give you the tools to talk through and mend unresolved issues that may have surfaced in your personal relationships.

Jack Hamilton and Elisabeth Seaman are mediators and facilitators with Learn2Resolve, which provides mediation, facilitation, training in communication and conflict-resolution skills, and team-building workshops in English and Spanish. They work with families, corporations, nonprofits, public agencies, and individuals. They are based in the San Francisco Bay Area in California.