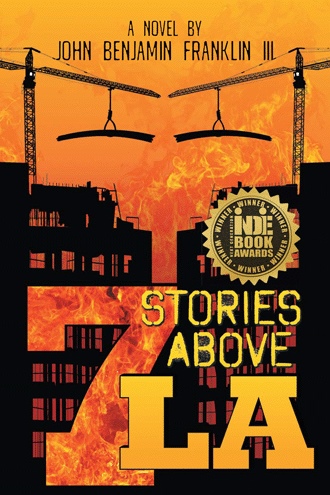 The man-crab evanesced. The cracked limbs that had squirmed in the sand letting out buttery blood and tangy sinew flesh simply vanished. Instead, I stood alone in the sand letting it slip through my gloved hand. The umber, coarse blood of the Earth slipping through my grasp back to the waiting, shaking ground. In place of the crab-man lay a huge swatch of land resembling nothing short of the moon. Rising peaks of dirt in a constant state of crumble gave way to huge circular holes marked only by deep parallel trenches.
Taking refuge, on the bank of one of these trenches, I sat until a spinning blackness stole my sight, then consuming orange, until finally blackness once again returned. The toxic taste of carbon monoxide coated my mouth as the Earth grew quiet and still. The process repeated itself several times until the mustard fog in my…until I saw the beasts for what they were. Earthmovers—huge vile machines that gouged the face of the Earth. A hundred tons of steel and blade stopping for nothing, a hundred tons of steel and blade contemptuously scarring the Earth, a hundred tons of steel and blade not seeing the irony.
Standing back, I spied the beasts following each other in a train of destruction. As the sun rose, I saw the torn roots and the dying insects litter the ground of their former, quiet home. Exhaust plumed as the mustard lights shut off and I stood alone in the world—the site.
My watch swung at my side. Fumbling with the latch I watched as the little hand overtook the six and I knew enough time remained. I needed to watch the race—the destruction.
Short, blunt sticks waving orange flags marked the course of the track. The Earthmovers—with their short, stubby heads dragging the long hollow bodies—moved along the course with only havoc on their minds. Hate grew out of my gut for the scene before me, but not even this hate, this nausea of hate could hide the smile invading my face.

Cain, a quixotic anti-hero, navigates the foreign and hostile world of construction as he builds the Twin Towers prison in LA. The novel follows Cain through the seven stories, nine counting the foundation and roof, of this brooding building culminating with the violent LA riots. Whop, Cain’s personal Virgil, guides Cain through the hell of work-site accidents, deaths, graft, greed, incompetence, and disillusionment. Unlike in Dante’s Inferno, Whop does not guide Cain to redemption. Instead, Cain’s foreman, Nickels, applies pressure to Cain’s mental state as the steel assaults his body and soul. While Cain sinks deeper into the construction site his hold on reality blurs by the surreal bombardment to his senses. He absorbs the maddening orchestra of noises and sights; the Native American iron worker, Coyote Eye, killing himself for his beloved; the rodbuster who robbed banks to escape the job; the sex addiction of Big Daddy and his crew of looneys; and the merciless steel trying to murder Cain one piercing shard at a time. The rest of the crew: Iron Horse, Tiny, Willie the Elevator Operator, Righteous Eddy Edmond, and the Funky Red Headed Dread Lock Dude notice Cain’s odd behavior, but they do not recognize his mental instability. As the Rodney King riot takes to the streets nine months later, LA burns in the night sky while Cain, Nickels and the cold steel collide.

John Benjamin Franklin III earned bachelor’s degrees in American studies and English and a master’s degree in English with an emphasis in creative writing from California State University– Fullerton. He has been a magazine editor, a copywriter, and freelance writer with publishing credits in the LA Times, Orange County Register, and various online publications. John is a second generation rodbuster. The father of four children, he lives with his wife in California. Visit him online at www.magic8oc.com.